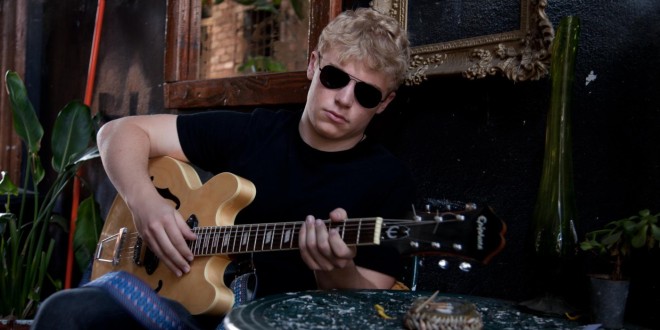 The release of Jimmy Jax Pinchak’s second album, Blue on Arrival, will likely be seen one day as every bit the career defining event as a first album. Debuts are sometimes slapdash, nervous affairs where an artist is just finding their feet. Pinchak’s debut was remarkably assured, particularly for such a young performer, but a pervading sense that he was trying this on for size lingered. There’s nothing like that on his second time around. Pinchak couldn’t be more comfortable playing with a band that he shows off an obvious affinity for and performing largely original material that pays all the right kinds of tribute to blues music.

“Murder” has a lot of emotion. The band, Pinchak included, pours themselves into this opener with a go for broke attitude and if the song’s themes are familiar, they are pushed at the listener with such gusto that you just won’t care. This is a crack band and they play this music with real passion that’s never going through the motions or cookie cutter. They give it the same oomph on the second song “Hit My Stride” that mixes police chases, wayward women, and hard times in an entertaining lyric that Pinchak’s guitar snakes nicely around. Pinchak tackles some classic blues with interpretation of “Crossroads Blues” and might surprise some listeners with how thoroughly he inhabits such an iconic entry in the genre. “Rock Me Down” has a gentler tilt than some of the blues on this album, as if it were written as for possible radio play or as a good time live number, but it swings with the same bluesy grace as the rest of the album. The rhythm section is a big reason why this band works so well together and their ability to find the deepest pockets for the album’s best songs helps send Blue on Arrival into the stratosphere.

Nearly every blues band of any note offers up longer songs as a means of proving their jamming talents. Perhaps Pinchak plays a bit too much to cliché by offering up one of his one, that’s arguable, but even cynics will find little to dislike about “Poison”. The Jimmy Jax Pinchak Band does slow blues very well and the song’s familiar themes get new life thanks to the musical dialogue. Each player seems to anticipate what their counterpart will do and it creates a kind of larger dramatic procession thanks to how well they listen to each other. The rhythm section’s ability to play in the pocket hits another zenith with “I Can’t Stop”. The lyrics are a typical over-exaggerated blues avowal of love, but it’s the understated interplay between Pinchak’s gripping guitar and the organ that wins the day. The album’s final duo of songs, “Best I Could” and “Stuck in Glue”, could hardly be more different. The first is a slowly unfolding, yet concise, weary blues about lost love while the concluding song is an acoustic hard luck tale taken at steady clip. The difference gives Blue on Arrival an unique ending that, also, demonstrates how talented the band is at maintaining an interesting balance of styles.

In his official studio debut, a single and music video by the name of “Looking …