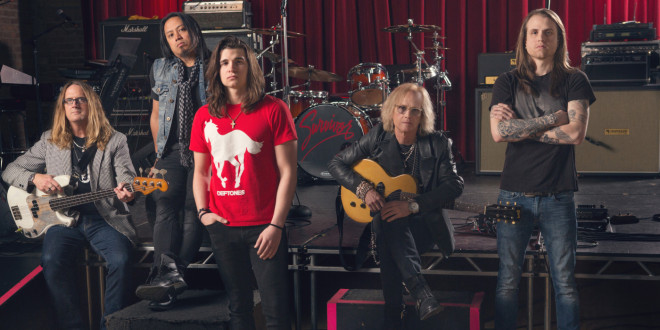 Grammy® award winners Survivor are ready for their biggest year to date with a new lead vocalist, Cameron Barton, breathing new life into the legendary band and a tour that will take the group to fans across the country. The tour kicked off at the Hard Rock Hotel & Casino in Sioux City, Iowa, on March 11 where the band played their trademark arena rock, complete with all of the hits, to a packed crowd. The next stop will take them to Frost Park in Dania Beach, Fla., for the Dania Beach Arts & Seafood Celebration on April 2 with subsequent stops in Wis., Texas, Nev., Minn., Mich., Ill., Miss., Mont., Ky., N.Y., Conn. and Calif. (See full schedule here) Fans can expect even more shows to be announced in the coming months.

New vocalist Cameron Barton steps into the role of Jimi Jamison, who passed away in Sept. 2014. Survivor is excited to have Cameron bring his powerhouse vocal style to the band’s live shows. “He’s great,” says the band’s Frankie Sullivan. “After hearing him, I was in Nashville within twenty four hours. I was in the studio with him about a day later. I stayed with him for about four days, and put him through the ringer. He just kept getting better and kept delivering.” Barton’s commitment to getting the job done is something that impresses his bandmate. “He’s a very focused guy. Most musicians aren’t that focused when they are that young. He learned twenty songs in about eight days.” Sullivan noted that there might be pressure of taking on the role of lead singer in a group with such a historic pedigree, but he says Barton doesn’t seem to be affected by the pressure. “He just wants to do what he does. You get new people in with new ideas, and usually that comes with a different vibe.”

About Survivor:
Survivor released their first album in 1980 on Scotti Brothers. Their first Top-40 on the Hot 100 came the next year with “Poor Man’s Son.” Their big break would come in 1982 when the band was asked by Sylvester Stallone to provide the theme song for Rocky III. That single, “Eye Of The Tiger,” hit # 1 – staying there for seven weeks, winning a Grammy for Best Rock Performance By A Duo Or Group With Vocal, a People’s Choice Award, and an Academy Award nomination. The song came in at #18 on the “Top 100 Singles” chart in Billboard‘s 100th Anniversary issue and it’s well over the 300,000 mark on iTunes, where it’s currently holding strong at #9 on their “Top Soundtrack” chart. The band also struck paydirt as a result of a Stallone movie when “Burning Heart” appeared on the soundtrack of Rocky IV in 1985, hitting # 2 on the singles chart. The band’s VITAL SIGNS, was another huge success for the band, peaking at #16 on Billboard‘s “Top 200 Albums” chart thanks to the Billboard Top-20 hits “I Can’t Hold Back” (#13), “High On You” (#8) and “The Search Is Over” (#4).

For more information about Survivor, log on to SurvivorBand.com