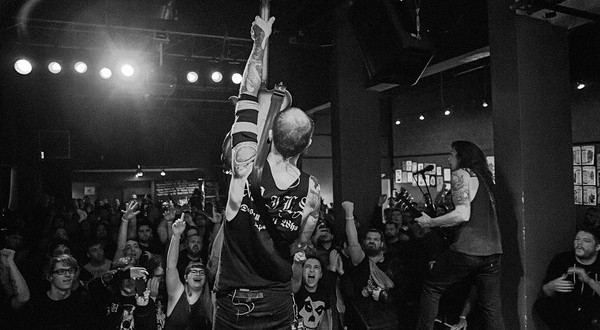 Baroness, who kick off a five-week North American tour later this month, have released a video for “Shock Me”:

Filmed in rural Pennsylvania, the video brings to life a number of elements from the incredible artwork Baroness albums are known for.  The clip was directed by Don Tyler and John Baizley with art direction by Karen Jerzyk.

Baroness have also named the openers for the band’s highly-anticipated tour with Youth Code on all non-festival U.S. dates, Mutoid Man opening shows in Eastern Canada and Heiress handling dates in Western Canada. Baroness recently wrapped up an extensive European tour, which was hailed as “defiant, dominant and full of heart” (Prog) and a “devilishly complex take on power rock ‘n’ roll” (London in Stereo).

The tour, which includes stops at the Sasquatch, Project Pabst and Shaky Knees festivals, kicks off on April 29 at the Royale in Boston before wrapping up at the Fonda Theatre in Los Angeles on June 3.  The band has also been confirmed for Psycho Las Vegas on Aug. 28.

Purple was released on Dec. 18 via the band’s own Abraxan Hymns label. The Dave Fridmann (The Flaming Lips, Mercury Rev) produced album has been universally praised with Pitchfork saying Purple features “some of the biggest, strong songs Baroness has ever written,” Entertainment Weekly calling the album “their finest release yet,” Rolling Stone Australia dubbing it “the most dynamic, robust guitar album this year,” Mojo echoing those sentiments, saying “Baroness have delivered their masterpiece: an album grounding their cosmic heaviosity with earthbound, compelling drama,” and German magazine Visions declaring “the quasi-comeback Purple is their best album to date.”  Purple landed on a number of year-end best of lists with Pitchfork awarding it #6 on their Best Metal Albums of 2015 round-up and Rolling Stone placing the release at #7 on their 20 Best Metal Albums of 2015.