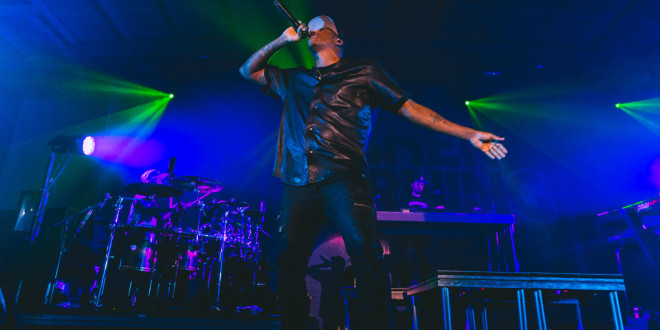 The final trek for the Higher Learning Tour in California was in sight as the Transparent Productions company made their way to Biola University in La Mirada, CA on this Sunday evening. Upon the student campus lined a river of fans, eager to walk through the venue doors. The sound of chatter and excitement came in waves as the concert goers quickly took their places amongst the bleachers and center floor of the gymnasium. As the lights dimmed down upon the stage, a beam of light glowed upon Liz Vice; a singer whose powerful and smooth voice filled the empty air with the sounds of Jazz and Soul. Roars of applauds followed her every performance of her opening act. As Liz Vice began closing out her act, invited guest artists like Mr. Talkbox, who is known for his associated acts with Grammy winning artist, TobyMac, joined her in the final performances of the opening act. All of a sudden, flashes of white and blue crashed the room as DJ Promote made his debut upon the stage. Spinning, scratching and dropping the bass, this DJ pumped up the crowd with mix tracks of various artists, featuring songs like Hot Bling by Drake and Watch me by Silento. Thunderous vibes came about the room as the crowd became wild with crazy energy and Cam Newton’s Dab impressions. After a brief video infomercial on a Feeding the Hungry campaign, supported by the artist of the evening, the stage became dark once again. With the stage glowed from underneath his shoes as the performer of the hour arose from his kneeling position with the mic pressed upon his lips. Lights of green, blue, and white stormed the stage as Lecrae moved across the stage with his hand in the air. A sea of hands and arms swayed across the room as the show continued. Fans screaming as they recorded live performances of the Hip Hop rapper. Lecrae dominated the stage throughout the evening, singing crowd favorites such as “Dirty Water” and “Welcome to America” from his Anomaly album. Nostalgic feelings filled the room as the fans sang their lungs out to the songs of their youth. Lecrae, standing tall above the crowd on-stage, gazed upon the crowd – the glory of God would be filled in this place as the show continued to drift on into the late hours of the night.