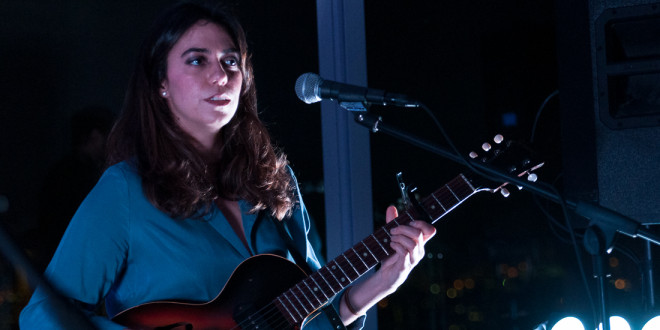 Singer-songwriter Haroula Rose (Haroula Rose Spyropoulos) is back with the release of her second LP Here The Blue River, out tomorrow March 25th. This past Monday evening, Rose was joined by several dozen fans at The Standard’s Penthouse in the East Village for an album release party as part of the Annie O Music Series.

The sprawling backdrop of the lit Manhattan skyline was a perfect setting for this quaint introduction into Rose’s upcoming LP. The new material, inspired by the imagery of “The River” by Ralph Waldo Emerson, “The Book of Questions” by Pablo Neruda and “Once Upon A River” by Bonnie Jo Campbell, Here The Blue River is a remarkable departure from the acoustic folk sounds of Rose’s debut LP.

Incredibly humble and clearly excited to be amongst friends and family (her parents were in the audience), Rose played a haunting 40 minute set that passed in the blink of an eye. Her lyrics flirt with melancholia, speak of nostalgia and the everyday passage of time. With her smoky voice and compelling songwriting, Rose offers a daydreamy soundtrack best heard in a summer night under the stars.

Here The Blue River is available for pre-order from iTunes, and comes with 3 bonus songs available immediately ahead of tomorrow’s release.

Check out some of our photos from Monday evening’s performance and see below for Haroula Rose’s spring tour dates with David Wax Museum and Darlingside.

Chicago-born and LA-based Rose has worked in film and television as a writer, producer and director with her heart in music all the while. She served as producer on 2013’s “Fruitvale Station” and her music has been featured in “Still Alice,” as well as “How I Met Your Mother,” “American Horror Story” and “Being Human.” In 2011, Rose self-released her first LP, These Open Roads. In addition to her work in film, her music has received plaudits from LA Weekly, American Songwriter, The LA Times, Vice, and No Depression who praised her as a “gypsy soul.”