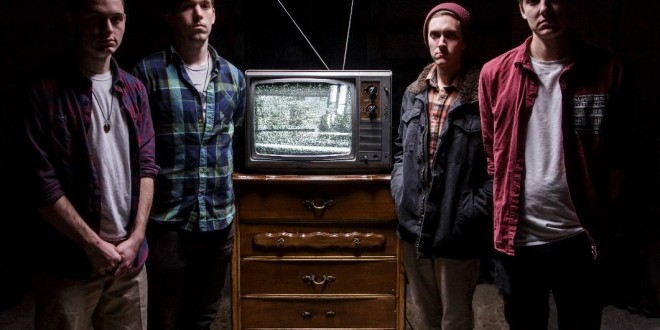 St. Clair, MI based Alt-Rock group Stories Untold will independently release their debut record, titled Can’t Go Home, on May 13th. The group dropped their first single and music video off the forthcoming album, “Things Change”, earlier this year. Pre-orders for the album will be available starting March 25th via iTunes as well as the band’s official website. Digital pre-orders will include an immediate download of a brand new song, “All Your Fault.”

As part of the announcement for Can’t Go Home, the band has released their cover of Jet’s “Are You Gonna Be My Girl” due to overwhelming demand from their fans after including it in their live show. The cover, which is available for free download and will not be featured on the album, was recorded at Metro 37 Studios and produced by Kevin Sharpe. A studio video of the cover can be enjoyed via the link below, with the free download link included in the video description.

The band is also excited to announce that they will be performing at this year’s BLED FEST, which takes place in Howell, MI on May 28th and also features The Black Dahlia Murder, Knuckle Puck, Aaron West and the Roaring Twenties, and many more. Stories Untold will soon be announcing an official album release show for early May, and announcing Summer touring plans later this Spring. The band’s first show of 2016 saw them headlining a near-sold out show at The Crofoot Ballroom in Pontiac, MI.

Stories Untold have also contributed their single, “Things Change” to “The Great Big Susiepalooza Compilation, Vol. 1”, a benefit project that donates its proceeds to The Lustgarten Foundation, which is dedicated to raising money to fight pancreatic cancer. To find out more about the Lustgarten Foundation, you can visit https://www.lustgarten.org/. The compilation record features 61 other artists, including Modern Baseball, Beach Slang, Superheaven, and many more.

STORIES UNTOLD formed in 2013 under the name The Accident; which would serve as a rather apt title, as the band was formed inadvertently while creating a movie for a college project. While working on the film’s soundtrack, the group discovered an unquestionable enthusiasm for making music. By 2014, the band was playing shows as a four-piece group of Jake Clark (bass, vocals), Kevin Quednau (guitar, vocals), Tim Williams (guitar, vocals) and Brennen Moloney (drums).

Can’t Go Home, the band’s debut album, is the fruition of a collective effort to capture the sound and emotions that made these four feel such passion and romanticism towards music to begin with. It walks a well-tempered tightrope between modern emo angst and post-hardcore inhibition to create songs that are both remorseful and earnest in tone. From the feverishly well timed syncopation and guttural cry of songs like “Too True To Be Good” and “To Cast You Out”, to the anthemic love-gone-wrong stylings of “Things Change” and “Listen”, Can’t Go Home has the potential to become a new found favorite for fans of bands like Taking Back Sunday, Brand New, Alexisonfire, and Story Of The Year.