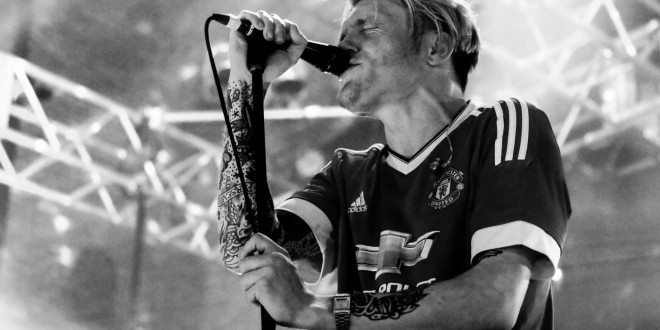 With a riveting combination consisting of the hard-hitting Like Pacific, the emotional Knuckle Puck, the positive Neck Deep, and the energetic State Champs last Sunday night, it comes as no surprise that The Beacham experienced a truly one of a kind and memorable evening. Although the evening seemed to be rushed due to the venue itself becoming closing and re-opening as a night club later that night, the quality of each performance remained phenomenal. Like Pacific opened for the others with a set of seven tracks, finishing their performance with the powerful song “Distant,” from their latest album Distant Like You Asked

Following Like Pacific was Knuckle Puck. With a slightly longer setlist, the band managed to squeeze in a few grateful words, thanking the crowd and even dictating the audience to give themselves a round of applause for what they’ve done for the band. What truly was pleasant to see during Knuckle Puck’s set was front man Joe Taylor grinning to himself as the crowd sang the lyrics to “Pretense.”

Once Knuckle Puck departed, it was only mere moments before Neck Deep emerged. With a grand setlist of 14 tracks, the band delivered an energetic, memorable show. With fan favorites such as “December,” “Kali Ma,” and “Gold Steps” having been sang, the crowd returned the same energy given to them by the band via constant crowd surfers and united voices.

State Champs’ setlist also consisted of 14 tracks, including the popular track “Secrets,” the sweet typical love song, “If I’m Lucky,” and the well-known, “Elevated.” State Champs ended the night extremely well, front man Derek DiScanio making sure to interact with the fans, running to and from one edge of the stage to another.

Overall, this year’s Alternative Press World Tour is definitely a must see if tickets are still available in your area if you’re a pop-punk fan.