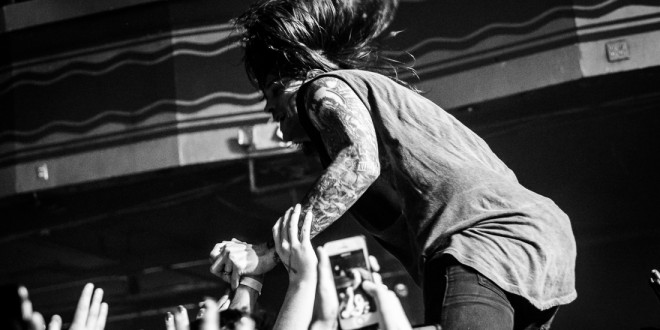 In a scene dominated by circle pits, loud guitars and even louder vocals blessthefall is a band who’s live performance stands out in a crowd.

The Drop The Gloves Tour featuring support fom Miss May I, The Plot In You, Sirens & Sailors and A War Within made its way to New York City’s historic Webster Hall this past Saturday, March 5th. And while the show was met with a particularly sad 2-person demonstration of religious protesters, fans were undeterred. Webster Hall’s grand ballroom was buzzing with baited energy by the time 9pm rolled around; an excitement that bubbled over and erupted in a roar of screams once blessthefall took the stage to “Hollow Bodies.” It was the first of an unrelenting set showcasing a ton of crowd favorites such as “Against The Waves,” “Walk On Water,” “Dead Air” and “You Wear a Crowd But You’re No King.”

A blessthefall show is more than a music showcase – it’s an all encompassing experience. Unafraid to jump down and interact with the audience, frontman Beau Bokan’s presence was positively magnetic as he prowled the length of the stage. The band easily put on one of the most energetic shows of the night. Though I can’t imagine venue security was entirely thrilled with the way Bokan reminded the crowd that the number one requirement of a blessthefall show are high fives given to him from crowdsurfers. It wasn’t long before a sea of bodies started to rambunctiously float toward the stage. The band finished off the 14-track set with a heartfelt encore of the ballad “Open Water.”

The Drop The Gloves Tour continues Thursday, March 10th in Atlanta, GA. For info & tickets visit blessthefallmusic.com. Be sure to pick up To Those Left Behind out now on iTunes.