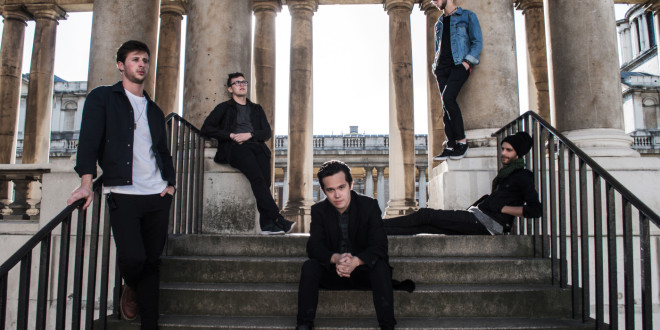 Here to quench your thirst for some true alternative rock tunes is the five-piece London band, FADES. Equipped with their six-track, self-titled debut EP due out March 11th, these guys are sure to draw you in with their grungy guitar riffs and complex melodies.

Founded in 2014, FADES consists of Joshua Woo (vocals/guitar), Alessandro Melchior (guitar/keyboards), Lucas Mendes (lead guitar), James Dibble (bass) and Keir Adamson (drums). Starting out as Metasic, the five came together to perform the launch of the EP, Falling Into Place, which was largely a solo effort by Woo. The band spent the first half of 2015 on the road, performing all across the UK and garnering much praise from audiences and critics, which landed them with a gig supporting Nothing But Thieves. In July 2015, the band went to Italy to record their upcoming EP. Upon their return, they made plans to change their name, officially announcing the change in October 2015 when they became FADES – named in part after the Queens Of The Stone Age song “In The Fade.”

Opening up the EP, “Breaking Through The Walls” immediately reminds me of Arctic Monkeys. This energetic track is guaranteed to get the listener hyped up. This energy is carried over into “I’ve Been Away Too Long,” where Woo sings about coming back to reality after being stuck in his dreams for too long.

“Before My Eyes” will trick you into thinking it’s going to be a ballad as it opens with Woo’s clear voice crooning out over soft acoustic guitars. This quickly gives way to crunchy guitars that give the song an Audioslave vibe combined with an 80’s ballad feel. I feel that this track allows us to see the band’s diversity and adds another layer to FADES’ potential.

Kicking the EP back into a higher gear, “The Killing Floor” gives me a thrill, as the song strongly reminds me of another personal favorite band, Franz Ferdinand. This track has a really sexy feel to it, as the lyrics seem to portray both the act of sex and of giving your bleeding heart to another.

With what I assume is a tip of the hat to Queens Of The Stone Age, “Dog On A Leash” sounds like it belongs on the Lullabies To Paralyze album. The lyrics in this song portray that feeling of getting pumped up to face down your obstacles only to decide that there’s just no use in trying.

Finishing up the EP with a rather psychedelic sound, “Everybody Knows” is a slow track that slowly builds up with emotion as Woo sings about trying to hide away your pain. However, the anxiety creeps in that everyone already knows what you’re concealing.

From the pumped up start to the emotional end, the self-titled debut EP from FADES is a must-have for every alternative rock fan. It’s full of the complexity and diversity that can usually only be found on a full-length album, and I applaud the band for making full use of these six tracks. Be sure to grab yourself a copy when the EP comes out on March 11th. Lucky fans in the UK will want to attend the launch event FADES will be having at Proud Camden on March 10th. Entrance is completely free and you can RSVP here. In the meantime, check out the “Breaking Through The Walls” music video below and over on Soundcloud where you can also download the single.

Previous Crossing Rubicon Premieres New Album
Next Panic! At The Disco To Film Live From The Artists Den Episode on Sunday, March 13th in Los Angeles