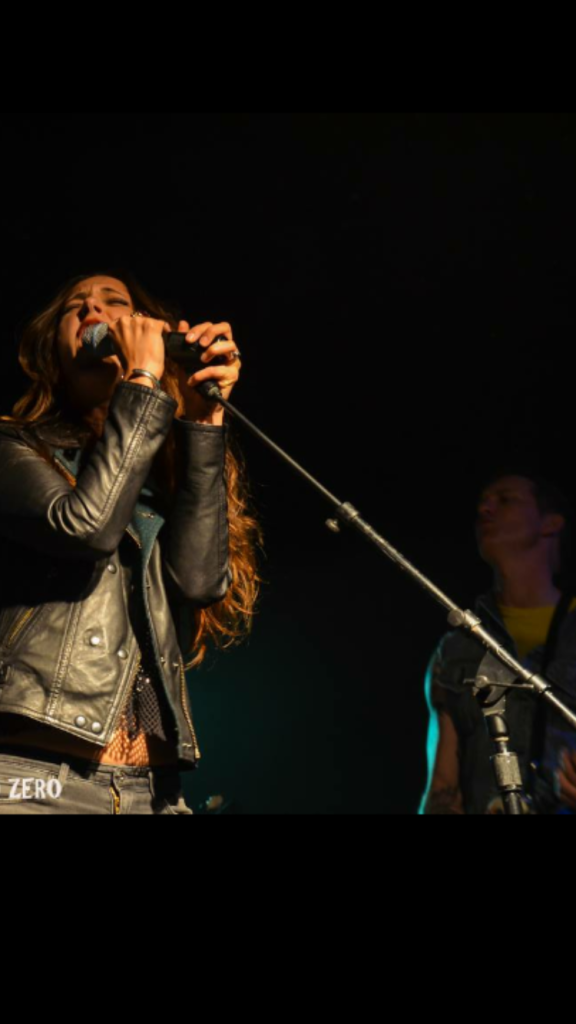 Tell us a bit about the inspiration behind the song Smile and how did the video come together?

Utah: I think its about the feeling of being out of control. You know, you can try your best to manipulate the world around you, pretend that you determine the outcome of events or that the big bad world won’t get you. Which of course it gets us all in the end right?! So what are you going to do? Curl in a ball, or just except that this is a wild place and fuck it, smile.

Steph: Yeah, I think of it as tongue in cheek kinda. You’re smiling, but its the kind of smile you have on your face just before disaster strikes. Or like just before you’re about to do something where the odds are against you, and you just smile and go for it. Put all the chips on the table with a grin and a wink.

Utah: It’s probably inspired by playing music live as well. You’re back stage like, “what the hell did I get myself into?”, but you’re in it now, so… bonzai!

Steph: The video came together mostly in the editing to be honest. We, as a band have habit of just shooting as much as we can of just day to day band life. Wether it’s just on our phones at practice, or actually have our go-to videographer Mike Taylor come in and shoot us at a gig or whatever without any real like story or concept or anything. Then when it’s time to put something out, we’re like “what do we got?”  In the case of the “Smile” video our drummer Joe, his girlfriend Cara shot a lot of it at rehearsals and Mike Taylor took the footage and made it crazy and cool looking. He really captured the essence of the song I think. Then we got some drafts and threw in some ideas and voila! video.

Utah: I think we got lucky this time, having all the shots we needed… next time would be sick to actually have like a script and full crew and go all out on a video. Stunts and fire. That would be way fun.

How was the tour with Moonshine Bandits and how did their fans react to your style?

Utah: The tour was epic. A hell of a lot of hard work, but a hell of a good time too. We had a blast with all the guys on the Moonshine Bandit train. They’re a great group of dudes. And of course the reason we do any of this is to play live, and anytime you’re out playing shows every night… you can’t beat it.

Steph: The fans were great! Our styles are pretty different for sure, us and the Bandits, but if you just go and rip your hardest I think that translates to whoever is watching. It’s always great to meet the fans after the show. They’re always fun, and usually really good people, and the fans on this tour were no different.

Utah: Yeah, I think I speak for all the guys when I say hanging with fans after the show is one of the highlights of touring. The venues usually have to sweep us out with the trash after each show. It seems like we’re the last to leave every night.

Steph: Damn, the house lights came on on us again…

Utah: So we have about ten songs recorded with hopefully ten more to go, then we’ll choose the best from those. Maybe twelve or thirteen tacks? The tour chopped up the recording process a bit which is cool, to get out of the studio for a while, but now it’s crunch time. Our five track EP, “Heads or Tails” is out everywhere, but we want to be ready to release the full length by the end of February, so there’s a lot of late nights and dark rooms in our near future.  Actually when we’re done with this interview it’s straight down to VTOL (Vertical Takeoff and Landing)  studio to record a hard rocker called “Sick Sick Sick”. VTOL is up in Humboldt County, so it’s just pretty much out in the middle of a beautiful nowhere. Which keeps us from getting too distacted. Our producer Rob Siefert-Gage, has been bringing his special brand of rock magic and tough love to the project and we’re all super stoked at how it’s sounding. He’s absolutely killing it.

Steph: The albums untitled right now… shit we need a title… but fans can expect a really rad rock album. There’s a good mix of hard stuff, bluesy stuff, straight up mid tempo partiers, some fast punky dittys, southern rock, as long as its under the rock umbrella it’s pretty much in there. Yeah, expect it to be exciting with no fat.

Utah: Right now it’s one hundred percent focus on finishing the album. I’m sure Ole Perrson, our manager at Diamondback has us fully charging as soon as we emerge from the death cave. He doesn’t give us many breaks and thats just how we like it. Well, maybe a little break… once in a while.. please.. I know me, Mike, Aaron, Joe and Steph will be itching to get out there and play, so I’m sure we’ll be on the road as much as we possibly can for the rest of 2016! We really want to do a West Coast run of shows this summer. We’re yet to really hammer the coast… Oh, and that video with stunts and fire.

What do you hope people take away from your music?

Check out the video everyone! Hey and thanks for having us Music Existence, you guys rock.

Being behind a camera has been a passion for myself since 2002 when I first started developing my own film as he honed my skills initially in a darkroom environment, and eventually transitioned into the digital world. I am photographer with a unique vision capturing life in its most priceless moments. The ability to captivate life behind the lens is truly exciting. My work ethic & unmatched drive for success makes me a true artist. I will stop at nothing to share my talent with the world and make sure everything I shoots becomes timeless.
@http://twitter.com/ArchAngelPhoto
Previous Gallery: Like A Storm at The Studio at Webster Hall, NYC 12.15.15
Next EP Review. Forty Four Hours. Only Just Holding On