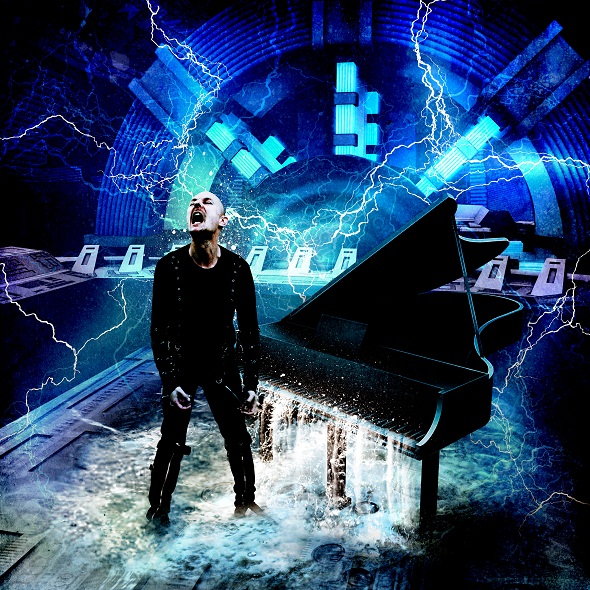 At the pinnacle of musical proficiency, multi-faceted songwriter/keyboardist Finn Zierler makes a triumphant return. His latest project, simply titled Zierler, brings to life the aurally explosive orchestral backdrop by way of vocalist Kelly Sundown Carpenter, guitarist Per Nilsson, bassist Truls Hagan and drummer Bobby Jarzombek. All members, brought together from different areas of the world, contribute palpable expertise as well as an organic ingenuity. Their debut album, ESC, is certainly Finn’s most apt endeavor—an ambitious exhibit of darkness, mania, and chills encased in shimmering pop purity. No amount of focus detracts from the symphonic and metal influences, as both play their part in providing equal stimulation for the ears. A focused balance of both components is crucial to effectively deliver, and Zierler does just that.

“A New Beginning” starts the album with a standard tempo and progression, all the while throwing listeners a sparingly intricate keyboard scale. This is a smart move not only from the context of preparing them for a culminated effort, but introducing a new generation to the prog metal universe. The presence of the instrumentation is considerably improved: the guitars have a crisper high end, the kick drums have a bigger rumble, and the strings warmly wrap around the guitars without drowning them out. I began drawing strong similarities to Finn’s previous project, Beyond Twilight, in the tones of the drop-tuned riffs and operatic vocals. As the album proceeds, the extent to which Zierler transforms the atmosphere becomes known: Nilsson’s lead melodies are far less stringent, and Carpenter’s vocals aren’t confined to a single identity. The next track and carrier single, “Agrezzor,” packs substance worthy of its title. It unloads a stimulating virtuosity, featuring a piercingly militant main riff, and synth-coated spider web leads amongst pounding, fill-heavy drum rhythms. After a lone transitional fill, the chord progression turns pop-oriented, and the signature sustains a beat that listeners can follow despite deviating from the standard 4/4. Key strikes and pull offs accentuate Carpenter’s voice, which assumes a clean and projected persona as he glides through the verses. Gradually, the positivity shifts into half steps, like a great white on the verge of attack. Carpenter emits a teasing grit, only to revert back to a momentary positivity once more. Suddenly, the main riff jumps out, Carpenter fluctuating between enharmonic screams, punk-tinged “shouts,” and clean singing, all in one phase—clearly an impressive feat to execute. On the third track, “Darkness Delight,” the combined atmosphere of harmonic melodies and dissonant violins plays like a chase sequence between listener and mystifying force. The drums’ constant shifting between up-tempo and mid-tempo rhythms resembles unexpected obstacles built to deter one’s advancement. Once the orchestration intensifies to a point, Carpenter sings in a tritone style that both harmonizes and models off the staccato-riffed progression. In this phase, he acknowledges the subject’s impulsive pursuit, proclaiming “Freedom and all its mysteries/For some, a way of dying/For some, a way to live”. The sinister edge smoothly transitions into an uplifting chorus that boasts rich Queen-inspired harmonies, which are eventually recognized as ‘relief points’ throughout the album.

By the fifth track, “Evil Spirits,” the tempo slows down and brings the bass line’s thickness to prominence. The song’s brooding doom vibe emits the classic Sabbath sound, with lyrics involving the projection of thoughts to provide a false sense of comfort. Its effectiveness in portraying the theme is utilized when, even after harmonious triumph, the main riff makes an abrupt reentrance at the end, signifying the evil spirit’s ultimate persistence. The ninth track, “You Can’t Fix Me Now,” whether intentionally or not, overlaps with the theme of the fifth track. But rather than merely repeat, the spectacle increases dramatically, and the spirit takes on the external form of a devious wall shadow. After a longstanding series of battles, the final track, “Whispers,” shows that for every moment of victory, there comes a time where one must accept that conflict will continue. As its initial theme involves parting with a nearly crippling sense of security, it expands into a climactic duel between man and a ghost holding past memories. At the 5:30 mark, the combined guitar and keyboard strikes feel like blows to the soul, forcibly endured in the vain hope of reaching eventual freedom. Once the song hits the 7:15 mark, the reality sets in: “As long as there is harmony/You will always be a part of me”. The ending phase has Carpenter repeating the line “It keeps going on…” before futilely concluding “…until it kills”.

Overall, ESC wholeheartedly set a new precedent for this generation’s prog metal scene. Besides effectively unifying the eclectic and electric influences, the album also provides just the right amount of storytelling and virtuosity. Zierler shines light on the complex, without denying the impact of the simple. Every theme emits a strong poignancy; Carpenter appropriately attunes his vocal styles to what is being expressed, and the instrumentation, beyond its superficially advanced properties, is a vital tool in justifying those emotions.

For more info on Zierler, visit the following:

In addition, check out the release trailer:

I come from a family who is passionate about all things music. I learned to sing at an early age, and by 13, had my very own Fender Strat guitar. I tried my hardest at learning all that I could. Because I was born with cerebral palsy, I had to teach myself an adaptive playing style. I learned to write and record my own music, despite these difficulties. In college, I started making great use of my writing abilities by reviewing music, as well as copy editing. I guess it's best to stick with what you know, while welcoming a fair challenge at the same time.
Previous We Are Not A Generation of Bystanders: Global Citizens Unite in NYC
Next Curse & Kisses