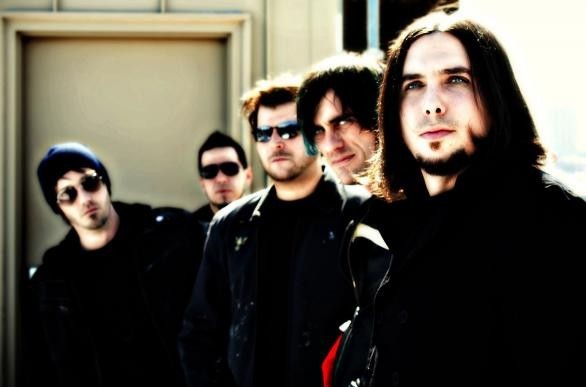 With a sound that reminds me somewhat of Disturbed, but is still uniquely all their own, hard rock group, Red Line Chemistry, is gearing up for the release of their album, Chemical High and a Hand Grenade, on July 24th.

Red Line Chemistry was formed in 2004 as five-piece band consisting of Brett Ditgen(lead vocals), Dave Fyten(guitar, vocals), Andrew Breit(guitar, keyboard, vocals), Tom Brown(bass, vocals), and Mike Mazzarese(percussion). The band hails out of Kansas City, Missouri, where they built up a solid fan base in the Midwest, branding themselves as one of the elite and most promising groups in the area. In September 2009, Red Line Chemistry landed their first record deal that lead to the highly acclaimed national releases of Dying for a Living in 2011 and Tug of War in 2013. The strong independent success of these two albums enabled the band to tour with names such as Stone Temple Pilots, Godsmack, Three Days Grace, veteran rockers Whitesnake, and many more. Red Line Chemistry also climbed the ranks in the festival circuit, landing multiple appearances at Rock on the Range, Rocklahoma, Rockfest in Kansas City and more.

Red Line Chemistry has found new life by teaming up with Pavement Entertainment, and are going back to their roots with this newest 12-track album.

I really enjoyed the opening track “Bullets and Armor.” The vocalist’s voice really works well with the sound of the band, and the song sets the pace for the album. The album’s title track, “Chemical High and a Hand Grenade,” is full of catchy beats and interesting lyrics. Next up is “Heavy.” Just like the name suggests, this track is heavy. The bass riffs are easily made out, which is something I really enjoy, and it sets the mood perfectly. Ditgen’s melodic entrance on this song was interestingly different from the first two tracks, showing just how dynamic he is as a vocalist. A frustrated mood becomes more apparent the further you get into this song, and it carries over into “Meds for the Hypocrite.” There’s a lot of betrayal, anger, and the feeling of being second-best in this song, especially with strong lyrics like “Tell me why it’s always all about you.” “The Empty” takes us back to being upbeat (or as upbeat as hard rock normally is). The strong lyrics are still prevalent throughout the song, and really grabbed my attention. The album slows down for “Penny Drama,” where Ditgen shows off his dynamic vocals again. I really felt a sense of longing in this song, and that feeling carries over into the next track, “The Soldier.” There’s hardly any hesitation in “The Soldier” as we’re plunged back into driving guitar riffs, but the pace still remains the same as the lyrics really paint the scene for the listener. Things speed back up in “Thinking Retro Kills.” I feel as though the band really had a blast recording this track. “Becoming of Saints” starts off with the prominent bass riffs we got a taste of in “Heavy.” This is definitely a sorrowful song filled with longing and martyrdom, but there’s an underlying element of hope here. “Apology” starts off acoustic as the band leads us back into a slow pace. With lyrics that read like a suicide note, this is one hell of a heavy song. The lyrics do turn around, though, giving us an idea of what it must feel like to find a spark of hope in the darkness of despair. “Home” brings us back to the heavy riffs again, as the song speaks of simply trying to find your way back home when everything around you is spiraling out of control. With a drastically different start from the rest of the album, the closing track, “Bloodlust (Dead in Santa Carla),” really grabs your attention as the band plunges headfirst into some really driving beats. There’s a cool breakdown a little over halfway into the song that leads into an impressive guitar solo.

Chemical High and a Hand Grenade is sure to be a unique piece of Red Line Chemistry’s legacy and is a must-have for the band’s rabid fan base. The album has sure grabbed my attention, and I absolutely recommend picking up a copy for yourself.