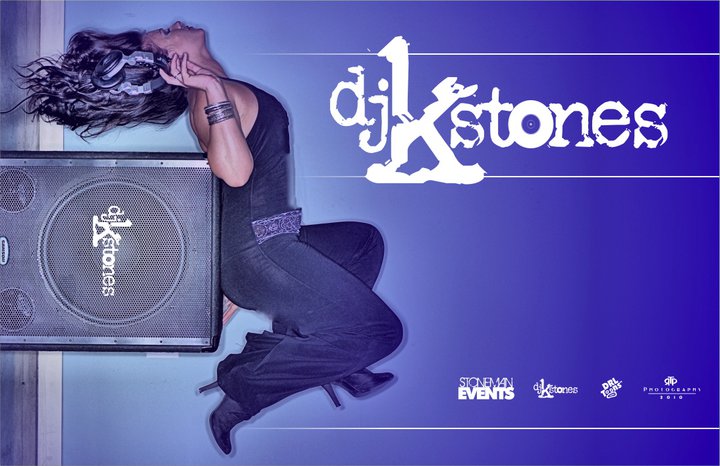 I first met DJ KStones in the early part of 2015 at the first annual RAW event in Raleigh, NC.  Before I became aware that she would be working this event I was reluctant to go. One reason. It was brick cold out. North Carolina had been bruised by the most brutal extremities of winter. But, duty called, and there I was on Hwy 40 heading to Raleigh at 9 pm to hear some incredible live music.  I wrestled my way out of the car to the front door of the venue, and as soon as I stepped in, voila, music revived me. But, it wasn’t just a random selection of songs; DJ KStones had owned the atmosphere and had been spinning the hottest combinations of records she could get her manicured fingers on. Needless to say, my ears (and nose) had defrosted and I’d forgotten that it was winter.  I purchased a Mojito, and two-stepped to the dance floor. DJ KStones did exactly what every good disc jockey should, she made me forget that there was a world outside of the reach of her sound system’s scope.

The woman was and is phenomenal. Her educational pedigree is as impressive as her skills on the 1’s and 2’s. An East Carolina University Alumni, she has double majored in Public Relations and Broadcast Performance. DJ KStones has been named as “one of the hottest female DJ’s in the nation” as cited in  Carolina Promoter Magazine. DJ KStones’ name is beginning to become a familiar name, and at the rate she’s moving, not seemingly impossible to becoming a household one. There is a long list of accolades blazing behind her stiletto heels, first kicking off her career with the iconic Def Jam Records brand and later serving as the general manager and Hip Hop Director of WZMB 91.3 FM. DJ KStones has also been the recipient of the 2011 Carolina Music Awards DJ of the Year, and the 2011 Raleigh’s Downtown Favorite DJ. And rightfully so! Stones has been rocking the hottest parties & planning some of the triad’s most elite events which include, but aren’t limited to: Soundfest, M.A.D, Pretty in Pink, Femme Fatale (no direct affiliation with MusicExistence’s Femme Fatale Friday), she has her hand in countless charity events, and has been a part of many breathtaking weddings. In addition, she’s been the driving force behind bringing major artists to the Triangle such as the Nappy Roots, and Talib Kweli.

She’s paid her dues, highlighted her versatility, earned her stripes and now DJ KStones is highly sought after for every type of event. Stones is coined as “the hardest working DJ in the state”, and “the most well rounded”. For the last four years she’s taken part in the Scratch Events and Scratch Academy based in the music industry hotbeds of New York, Los Angeles, and Miami. Working for Scratch, she’s had the opportunity to showcase her talent for the renowned and beloved brands of Ann Taylor, MAC, Sephora, Chanel, Madewell, the CIAA, Kate Spade, InStyle Magazine, Teen magazine, and many more. DJ KStones is also the official DJ of The Internet Summit, the Southeast’s largest digital marketing conference. She has also been apart of many local festivals including the Lonerider Showdown, Rock n’ Roll Marathon, and more!

I had the honor of being able to interview DJ KStones and find out more about the beauty behind the booth.

Is there one particular genre that you would classify yourself under? I get asked this question a lot. While there are more “favored” genres then others, I typically play everything. Although, my love for DJing began with old school Hip-Hop, Funk, and Motown.

What made you become a DJ and how long have you been DJing? I was always interested in the art and history of DJing. Growing up I was a huge fun of Jam Master Jay and Spinderella. I always wanted to learn but wasn’t formally introduced to DJing until my freshman year of college. I started working for a radio station as the Hip Hop director and ALL of the music was on vinyl. I had to play on turntables without any prior instruction. That was it for me.

This may sound crazy, but with all the technology out there, are turntables and vinyl records still necessary? And if so, do you spin? *laughing alound* Well, technically, turntables aren’t needed to be a DJ anymore. There are tons of different types of equipment, and most do not have “tables that turn”. There is a lot of button pushing nowadays making ‘turntablism’ less relevant. It’s kind of sad sometimes.

Top 3 favorite artist to spin? I love playing Michael Jackson because his songs are universal and always get people dancing. Not necessarily the most popular ones either. Also, Al Green. He’s my dad’s favorite artist and one of the reasons I fell in love with music. I also love playing Jay Z tracks. He has so many collaborations that cross over into the Top 40 realm.

When you prep for a venue is your playlist preset or do you have the ability to feel the crowd out and determine what records you will spin? I find that it’s good to have an idea of the songs you want to play. I tend to put together a very short partial playlist to give me some ideas, but most of it is reading the crowd. No matter how many playlists you put together, a really good DJ will never follow one. The most challenging part about being a DJ is keeping the dance floor occupied all night, and it requires a purposeful flow of music… that can only be created on the spot.

Now that everything has gone digital in the realm of music production and distribution…when it comes to DJing, has technology made it so easy that anyone can become a DJ? Definitely, and most everyone wants to be a DJ. I love it though. I say go for it! I know that only a select few have the true ability to be a well rounded DJ. Even with all the loopholes in the world via equipment and pre-set mixes, you still have to know how to read a crowd.

Whats the best part about being a DJ? What’s the worse part about being a DJ? I’d say the best part is seeing people enjoy what I do. Truly appreciating me and the art of djing, as well as my song selections, etc, is the reason I do it. The worst part is the schedule. We work crazy hours and usually miss times to hang with family and friends. Mondays and Tuesdays are basically our weekend.

How many hats do you wear? Is DJing all there is to the fabulous DJ KStones? *laughing* Definitely not. I run my own company, so I have to take care of all the contracts, payments, expenses, etc. I also assist with a few charity organizations, as well as spend free time with family and friends. I play a lot of sport s and stay active. I support other venues and DJ’s when I can, and work as a virtual dating assistant part time.

“Who gon’ check me boo?!” spotlight! What are some DJing terms you wish the general public would stop jacking up? Pretending to scratch turntables by saying “ficky ficky” “awwww yea”, “microphone check 1,2 (this is only cool if you are an MC *smiling*), and definitely pretending to “air DJ” which is much like “air guitar”. That’s just awful.

Respect the DJ: What tid-bits of wisdom would you give indie artists about the significance of  the DJ in the developments of their careers? I truly believe that DJ’s can still break records. It’s important for indie artists to have a strong connection with DJ’s so we can play the music for the public first. There’s usually no red tape with us like there are with radio stations and other media outlets, so getting music to us ASAP is imperative.

What words would you give to young females that look up to you and are interested in becoming a DJ? I say go for it. Save up and purchase equipment. Watch Youtube tutorials, connect with DJ’s around you and take the time to learn the art of DJing. Don’t just decide you wanna be a DJ and purchase a $200 controller and learn that way. Start from the beginning and educate yourself on the history of DJing. Come correct, earn respect, work hard, and follow your dreams.

As the CEO of N The Mix Events, DJ KStones presents her self and her work with impeccable distinction, class and new age appeal. Her work and ethics breathe personality into every event she is involved in, be it professionally polished business events, a more formal affair ornamented with prestige, or an informal setting drenched with high energy  in a club setting, she leaves no stone unturned.

Catch up with the incredible DJ KStone on her social platforms!

Know a Femme Fatale Female that should be featured on MusicExistence.com?

Or Tweet her name with the hashtag #FemmeFataleFriday  and tag a female artist that deserves the spot!

Danielle Niecey is a Content Contributor & Freelancer Writer for Music Existence Magazine. She is owner and writer for Blessed Bachelorette, an emerging women's lifestyle blog based in New York. Danielle is a published author ('Based On A Love Story'); Entrepreneur, Actress and Songwriter.
@DanielleNiecey
Previous Kwame Binea Shakedown
Next Red Line Chemistry – Chemical High and a Hand Grenade