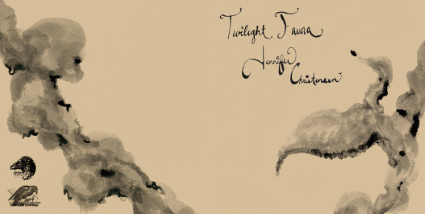 ‘Crossing the Threshold,’ the upcoming single from the one-man ambient metal band, Twilight Fauna is reminiscent of Twilight Fauna’s previous work Hymns of A Forgotten Homeland. The single will captivate its listeners with its simplistic guitar riffs. However the track can potentially lose the interest of the listener all at the same time. The similarity between the previous album and this single does not show much musical progression for Twilight Fauna. Fans of the old will either love its similarity or hate it.

Jennifer Christensen from Møllehøj, also featured on the EP, manages to create a haunting track that enables the audience to appreciate all the instrumentation behind it.  ‘Sickness Unto Death’ is a classical music piece that could very well be featured in the score of any top indie horror cult classic.

Christensen’s piece captivates with melancholic chords that make you curious and fearful of what may come next. It is compelling storytelling from beginning to end.  Definitely anticipating future works from Christensen.

The split 7” vinyl featuring both artists will be released December 18th of 2015.

Concert lover, music fanatic. If it sounds good to me, the rest doesn't matter.
@njaziaddict
Previous Murder F.M. – Happily Never After
Next MY LIFE WITH THE THRILL KILL KULT Announce The Elektrik Messiah Tour