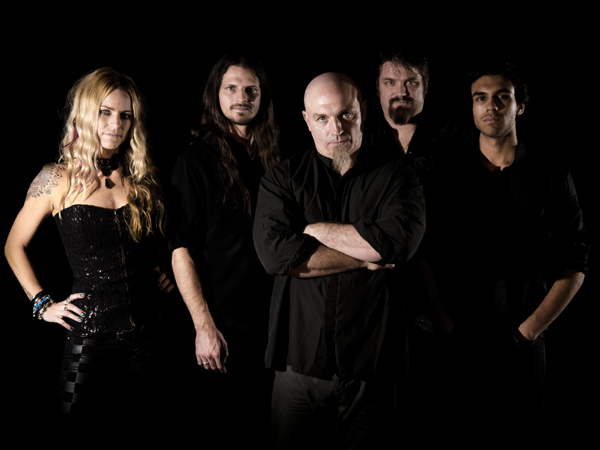 It’s human nature that most bands of the metal variety cling to their purist tendencies. Often times they’ll dismiss any influences that are decidedly ‘not metal’. On occasion, they may sheepishly deny being metal altogether. On the contrary, London, England’s Seven7 embrace a diverse array of styles without shame. In fact, when guitarist Nicolas Meier was asked by Worship Metal what the second greatest invention of all time to metal was, he enthusiastically replied, “All other styles of music!!!” Rightfully so, the quintet continues to build rapport with metal heads and alternative rockers alike. They have recently recruited Sally Jo on violin to further expand their sonic horizons.

In their latest offering, The Follower, Seven7 refines their signature blend of down-tuned riffs, double harmonic scales and progressive tempos with the most competent production effort by far.

The album’s opener, “Palms,” has a foundation driven by tribal-turned-blistering drums, oriental leads and thumping bass lines. Vocalist Dave Brown has a style reminiscent of Metallica’s James Hetfield, which proceeds to effortlessly morph into a Staley/Cantrell hybrid during the chorus. Not only was I amazed by such ability, but Brown’s voice also retains a kind of humble neutrality. While its influences are apparent, it has enough individuality, and actually blends very well with the rest of the instrumentation. The second track and carrier single, “Free,” sounds distinctly thrash with a modern twist. If I had no prior knowledge of this band, I’d easily mistake them for a forgotten band of the 80s based on the song’s intro. I like the texture of the snares and the jangly guitars during the beginning portion of the first verse. The latter half features a thunderous double bass drum buildup that teases the listener into thinking the chorus will follow. Instead, the verse continues with combinative galloping rhythms and a standard build up. But when the chorus finally hits, it is explosively thick and catchy. What follows is an intricate three-part solo that will surely inspire guitarists everywhere to hone their craft. “Fall,” the third track, is the band’s sophomore single. What particularly struck was its overdriven guitar attack and prominent nu metal energy. The album version is decent, but with the addition of violinist Sally Jo, the song feels more complete and keeps the album from stagnating. I feel that both the intro riff and chorus are benefited tremendously as a result. The vocals here are especially powerful, and I can’t help but be tempted to sing along, facial expressions and body movements included.

From the second group of tracks, “Magic Box” is a lot more involved. The verses feature a low-key, almost percussive guitar rhythm that is complemented by a fretless bass groove. Crunchy leads are layered with clean undertones that, when paired with Brown’s eerie high-pitched strain, makes the phase sound full. As the bassline changes pitch, the vocals accordingly mutate with menacing grit. During the chorus, the drums sound stimulating against Brown’s rather reserved delivery, though something bigger is to come. As expected, it isn’t until toward the end of the song when these components are utilized full force to near explosion—now that’s what you call ‘magic’!

The last track that I find worthy of mention is the penultimate, “Euthanasia”. It features portions of Carl Orff’s musical rendition of “O, Fortuna” set to a much-needed metal backing. While it is common practice for classical pieces to be included in songs and media, the intention for doing so comes off as superficial and perhaps out-of-place. However, Seven7 not only integrates this piece properly, but effectively. Both their song and the piece deal with being deterred by an opposing force. Much like the unpredictable nature of fortune, “Euthanasia” contains a call-and-response style that fluctuates between demonic and angelic. The climax of the song features the lyrics “We pray to you/Now it’s time to turn this thing around,” which, when considered in the context of the song, are wholeheartedly uplifting and inspiring.

Overall, this was the most enjoyable experience I’ve had from a current metal album. Although I’d prefer alternative rock to metal as my go-to genre, this album surpassed my expectations. Every nuance of every song is something fans of heavy music—myself included—can appreciate on a sincere level. One thing’s for sure, this band is ideal for the upcoming Rock Band 4 video game. But even if they aren’t included, I respect all they have to offer, through and through.

I come from a family who is passionate about all things music. I learned to sing at an early age, and by 13, had my very own Fender Strat guitar. I tried my hardest at learning all that I could. Because I was born with cerebral palsy, I had to teach myself an adaptive playing style. I learned to write and record my own music, despite these difficulties. In college, I started making great use of my writing abilities by reviewing music, as well as copy editing. I guess it's best to stick with what you know, while welcoming a fair challenge at the same time.
Previous ARIZONA ‘GLOOM METAL’ ACT NORTH TO SUPPORT NEW REISSUES ON NATIONAL TOUR
Next September Mourning Releases “Children Of Fate” Lyric Video & Announces Kickstarter Campaign Alongside Top Cow Productions