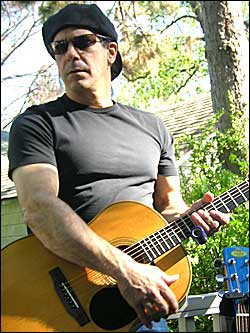 Mark Newman is a rough and tumble exponent of the blues circuit having logged thousands of miles supporting genre legends like Sam Moore, Sam the Sham, and Willy Deville, among many others. The New York native doesn’t put on airs however. Instead of aping Delta blues down to the last note and producing soulless imitations of his artistic betters, Newman takes his vast musical education and, ordinarily, finds new ways to express common emotions. There’s almost an artist of two minds battling for control here. The first Mark Newman is an arch-traditionalist unopposed to rifling through the vast history of blues and rock alike to fill his songs. However, another Mark Newman shows up on Brussels committed to surprising the listener and engaging them with the material in unexpected ways.

The jazz influences in “Mean Season” are obviously products from that second Mark Newman. This is a mid-tempo gem verging on something faster from the first note through the last. Newman orchestrates the tension beautifully and, somehow, that simmering hint of speed imbues the track with unexpected drama. A duller, less inspired artist turns in “Goin’ Underground”, but there’s a startling contrast fueling any reaction to this song. While the backing seems ridiculously simple, Newman pushes his voice harder here than on its predecessor.

“New York Mining Disaster, 1941” is an excursion into the unexpected. In 2015, covering the Bee Gees is always an unexpected move, but the selection should temper some surprise. Newman delivers a memorable rendition of the Gibb Brothers early folk-laced hit. “So, So Cynical” will remind some of Muddy Waters’ songs like “I’ve Got A Rich Man’s Woman” and even name checks the great Chicago bluesman, but Newman has enough range to convey dark comedy that his heroes lacked.

Brussels closes in failure. “Must Be a Pony”, another Newman original aiming to make audiences laugh a bit, can’t close the deal thanks to its unremarkable guitar playing and choppy movement. Despite this failure, it would be wrong to label the entire album as such. This stylish and talented New Yorker has the required spirit for this sort of music and, even if the songwriting chops sometimes miss their target, they connect far more frequently. His voice and guitar playing have few peers in the genre and, instead of singing with a nudge and wink, Newman delves deep into each of the songs with an audible respect for the power of music to move men’s souls.