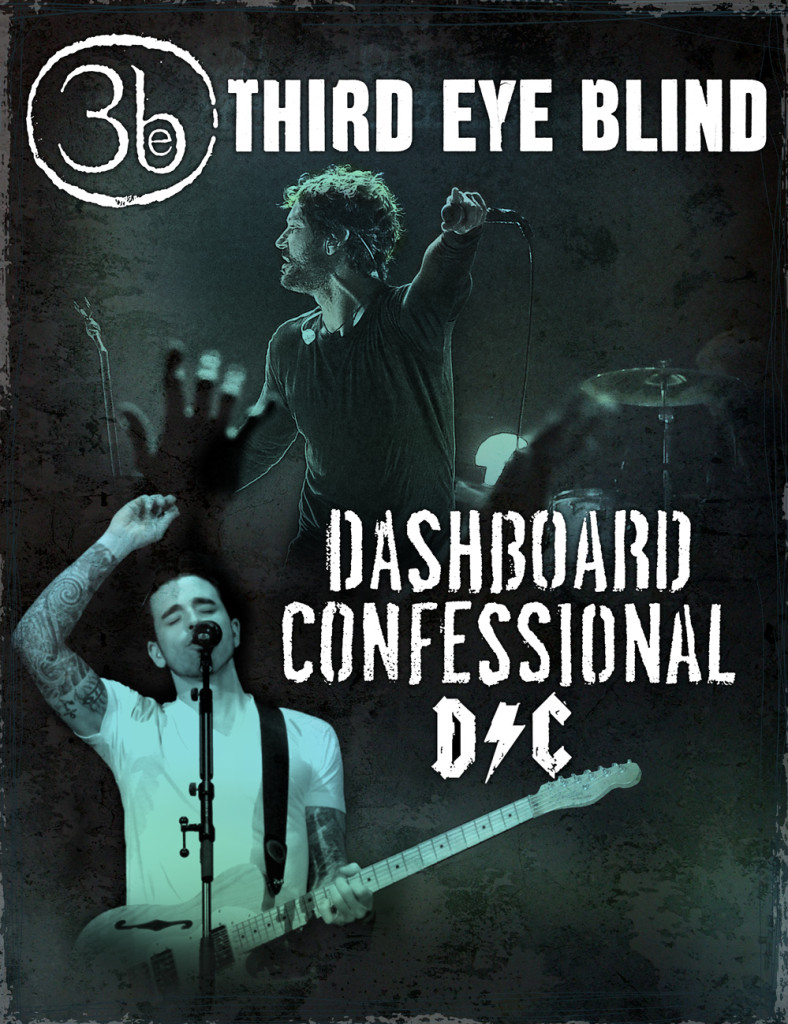 Two of alternative rock’s defining music artists, Third Eye Blind and Dashboard Confessional, are coming together for a massive summer tour in 2015. Kicking off on May 29 in Cleveland, Ohio at the Jacobs Pavilion at Nautica, the Live Nation promoted tour will visit cities throughout North America, including dates lined up in New York City, Philadelphia, Toronto, Chicago, Houston, Dallas and more. Tickets go on sale starting March 13 at www.livenation.com.

“I love the unbridled enthusiasm of a Summer tour,” says Stephen Jenkins. “All that crowd energy and the heat frees us up. That’s why Summer is so exciting. We haven’t been out for a year so we’re most excited to see you all.”

“After a break that has refueled and fired us up, Dashboard Confessional is more ready than ever to connect with our treasured fan base,” says Chris Carrabba. “We’ve missed you, friends, and can’t wait to spend our summer with you!”

Propelled by Chris Carrabba’s intimate and emotionally raw lyrics, sweeping acoustics, and his charismatic presence, Dashboard Confessional stands as one of the biggest alternative bands of the 2000s. Critically acclaimed and embraced by a legion of fans, Dashboard’s brand of alternative rock swept through a generation who embraced their albums and sold out arenas (their last full band tour culminated in selling out NYC’s Madison Square Garden!). “One is reminded of Bob Dylan’s Blood on the Tracks, only stripped down to the bare essentials,” praised PopMatters about their debut The Swiss Army Romance, setting the tone for the band’s massive impact on both their fans and the media alike, includingSPIN, Alternative Press, MTV, among many others.

Led by Stephen Jenkins, 3EB won wide success during a tumultuous group of years when the major-label recording industry was finally losing its grip on an enterprise that for decades it had dominated with steely efficiency. Nothing could have made 3EB happier! 3EB, however, have experienced no comparable loss. Instead, they have gained artistic clarification — and, surprisingly, a fan base who is larger, younger and more dedicated than ever.

Participation in the older, untouchable realm of nervous star-making could color a band’s identity. In the case of 3EB, it often blurred the perception of their brilliant musical creations. In recent years, those creations have recast the band among a current generation of fans.