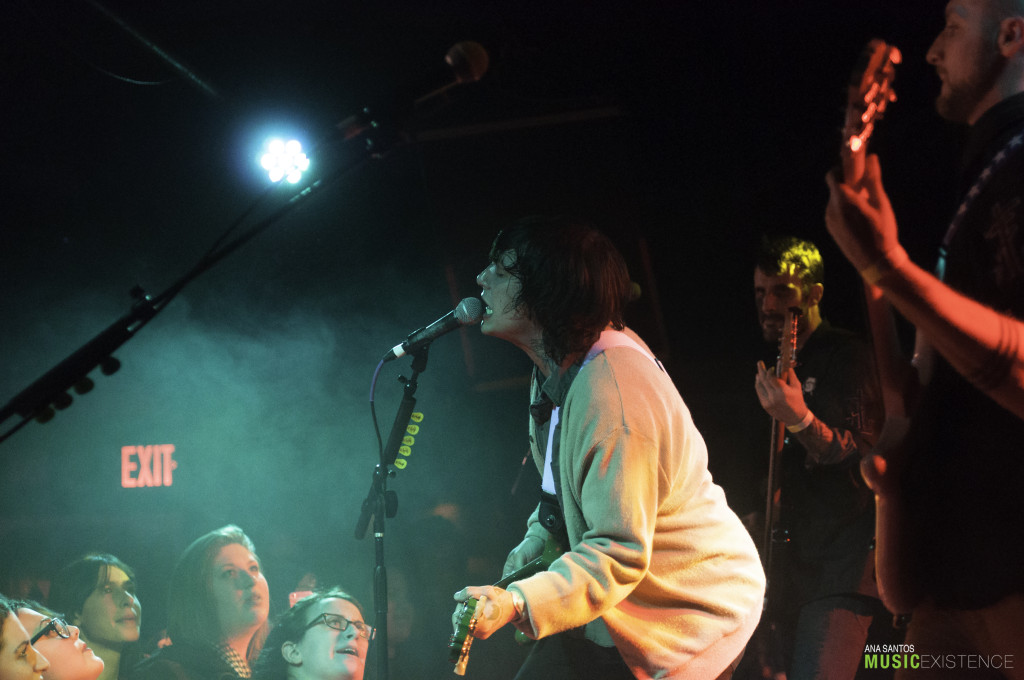 It’s been less than two months since I last saw Frank Iero perform. At the time, he was rocking out alongside local punk-rock legends, The Bouncing Souls at Asbury Park’s The Stone Pony. In my review I mentioned the stunted 40-minute opening set had been too short–merely a captivating taste of what a full-length show could be. Thankfully the wait for a headlining tour wasn’t long. On the evening of February 18th, Iero played his tour-opening gig in NYC’s intimate Studio at Webster Hall. And I do mean intimate.

Packed tight into the small basement venue with its blacked-out walls and tucked stage, the atmosphere was reminiscent of an early 80’s punk show. And while there was plenty of wildly-colored hair in the audience, the patented aggression famous in those vintage-Punk Youtube clips was pointedly absent. In its place was an overwhelming sense of adoration for the guitarist-turn-frontman who, in some cases, had been part of the audience’s lives for the better part of thirteen years.

I remember driving down to Asbury Park back in December listening to Stomachaches and wondering how it was all going to translate to a live performance. And more recently how it would even fill a typical hour-and-twenty-minute headliner set. My concerns were in vain. The songs translate perfectly to the live stage, with ample room for Iero’s passionately spastic stage presence in-between verses. From the moment the band hit the stage with “All I Want is Nothing” and “Blood Infections”, fans were singing. They sang every word of every song with abandon. The moment was cathartic and the world outside that flyer-covered metal door didn’t matter.

“I wanted the record to feel like you were listening in on it as opposed to listening to it. My intentions with regards to recording and writing these songs were I wanted to capture these moments in time,” Iero told Music Existence in a recent interview. There is absolutely no doubt in my mind that Iero achieved what he sought to capture. (Read it here.)

The band played through the great majority of Stomachaches, filling in gaps with a new song, and a LeATHERMØUTH cover that surprised many people (myself included, although is it really considered a cover?) The set ended with “Weighted” but the night was far from over because after much cheering, the band came back out for two more songs: “Stage 4 of Trying” and “Joyriding”, which is where things got really interesting.

Prior to finishing off the set, Iero invited the fans to sing along and cooler still–to climb up on stage with him. The response was immediate. One and two people at first, but soon what felt like half the venue had crowded up there for their time under the colored spotlights, phones out, smiles wide and the words to “Joyriding” on their lips. It was a magical end to a volatile night of raw energy and blunt honesty in such a way only Iero can deliver.

New York City was the first stop on the tour, so I’m incredibly curious to see how the band grows from the experience. You could say I’m looking forward to checking out the last stop on the tour on April 2nd in Asbury Park. If you have a chance, you should definitely do the same.

Here’s a clip with the audience on stage during the last couple minutes of the show.

Check out our photos from the show here!