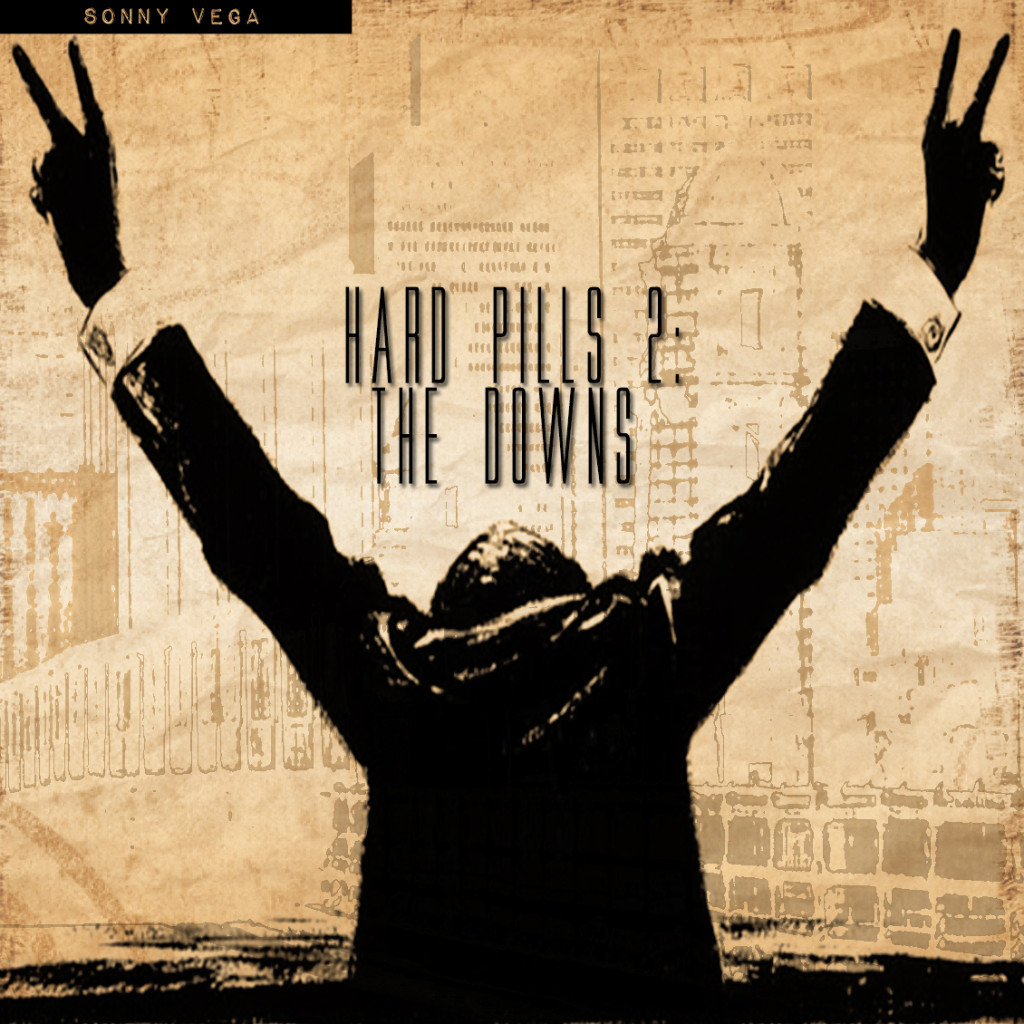 As consistent as he is talented the Boston based lyricist, Sonny Vega and BMB releases his 12th solo album project, “Hard Pills 2: The Downs“. HP2, as Sonny Vega loosely refers to the compilation, is a highly anticipated follow up album to his first solo project released in 2006, Hard Pills. What makes Hard Pills 2: The Downs memorable is Sonny Vega’s return to his in your face grit. Hard Pills 2: The Downs is so unapologetic. Sonny Vega lyrically illustrates things that make the listener uncomfortable, but its that raw appeal that his fans appreciate most about his style because its honest. Sonny Vega’s ability to invoke war like powers and vulnerable emotion through his music forces his listeners to share in the experience with him throughout the project. He never loses interest in what he communicates on record, commanding equal investment from his listeners to pay close attention. The man has something to say and makes it so evident in every song. Among the strongest solo tracks are Un-American Me, …You’re There, Lie To Me, and The Downs. Hard Pills 2: The Downs is well complemented with different elements of style and talent from J Marvel  and  B*Eazy featured on Squadron, Louis Gonz on Tell It To The Beat, and Danielle Blaiq on Vices.  The album is composed of 15 tracks, one of which includes a hidden bonus made available to fans that download the album from Bandcamp.  Hard Pills 2: The Downs has been well worth the wait. Sonny Vega took a moment between promoting his album to answer a few questions for his fans about Hard Pills 2: The Downs and his artistry.

What inspired Hard Pills 2? Life. For about 3 years I was completely opposed to doing a sequel to Hard Pills. Because the first HP had pretty much my 20+ years of life put into one whole project, I didn’t think I would have enough material of real life situations to capture and crest another full project. Life gave me the material. It just happened organically.
Who contributed to Hard Pills 2? (collaborations, production, etc)It’s just The Great Escape production crew. (J Marvel, 7th Letter, Blakk, and myself). Blakk didn’t make the cut this time. Only features on this piece are my BMB (block music boys) brothers J Marvel and B*Eazy. Also my dude Louis Gonz. He is connected through my fam Cyrus The Great. So it’s all family basically.
What are your top 3 songs on HP2 ?  (1)The Downs. (2) Tell It To The Beat. (3) Vices
Can you share your discography?
Who are some of your music inspirations? Nas, Lupe Fiasco, and pretty much anyone who can’t paint a picture vividly.
What would the perfect ‘set up’ for your music career look like? Hard to say. I don’t think about music as having a career. I always just made the music that I wanted to hear. Looking to have a perfect set up is like aiming to win with one style or one song. I don’t really have one lane that I ride. If fame, success, and all of that other stuff comes from the music and not a gimmick or just a flash in the pan spark, then I’ll consider it a victory.
What are your views on the state of hiphop music today? Hip Hop is ok…not terrible but not great either. There are always a few needles in the haystack. I’m not really a big fan of many of the commercially successful artist out there. I like more of the mid to late 90s hip hop. So I like to find projects that are more cut from that cloth. I think PRhyme did a great job of bringing that back with their album. It’s not gonna sell like an Eminem album, but it is hip hop and it’s there to be heard. It’s just a matter of are the people listening.

What legacy would you like to leave behind in your music? I always wanted to be the favorite artist of anyone who heard me. I don’t think that I’ve hit my pinnacle and I don’t know if I’ve made my greatest masterpiece yet but I know that I’m better than a good majority of the artist that are out now. I don’t think anyone can out-rap me, but hip hop is about more than just being the best rapper. It’s like battle rappers who can’t make good albums/mixtapes. We know you can rap but so can a million other people…so what else do you offer? I try to give a great balance of subject matter, lyrical wordplay, color, and make it all relatable. I think my ability to do so should make me a strong candidate to be a favorite of anyone who hears my music.  Let that be my legacy.
What is the best advice you can give to other aspiring hip hop artist? Do whatever you want. With hip hop being as diverse as it is, there are many lanes out there for people to get in and say what they want. So do what makes you happy. I may not like it just like I know there are some people who won’t like my music. I understand that everything isn’t for everyone. Once you know what you want your sound to be, just go make it become a real thing.
Do you have any musical affiliations (artist/producers) you frequent with collaborations/performances? It’s always my Block Boys family. I’ve done some production work outside but I usually just move with the fam. Next year I plan to be more active on the production scene for other artist outside my house.
When can your fans anticipate your next CD release? Maybe 1st quarter 2015. It’s called Summa Cum Laude. It’ll be my last solo project. I have other goals I want to achieve but being an active solo artist can take time away from those goals. So I’m gonna take a long break. I won’t say I’m never gonna do another solo piece but it’ll be a while. I want to focus on doing my group project with my crew and a couple of other things.
​Where can your fans find more of your music? All over the place. Datpiff, Soundcloud, Bandcamp. Next year [2015] I plan on cleaning things up and making my presentation stronger for my whole team. Plus I want to give people one specific place to get all of the work that I’m doing.

Liked this article about Hard Pills 2: The Downs by Sonny Vega?

Are you a Band or Artist looking for media press?
Contact Danielle Blaiq via email: Blaiqinq@MusicExistence.com

Danielle Niecey is a Content Contributor & Freelancer Writer for Music Existence Magazine. She is owner and writer for Blessed Bachelorette, an emerging women's lifestyle blog based in New York. Danielle is a published author ('Based On A Love Story'); Entrepreneur, Actress and Songwriter.
@DanielleNiecey
Previous Radio: The Reality Television of Music.
Next King Myers “Accomplish” x SkyBlew