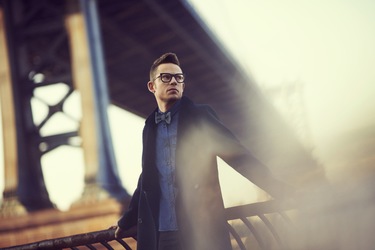 Norwegian troubadour Bernhoft, whose 2014 release Islander was just nominated for a 2015 GRAMMY Award for “Best R&B Album”, will play select dates in the U.S. next month. Bernhoft is set to perform at The Hotel Café in Los Angeles on January 7, Rockwood Music Hall in New York on January 9, and The High Watt in Nashville on January 12. Please see below for full details.

Islander, which reached #1 in Norway earlier this year, is Bernhoft’s third full-length album as a solo artist. The album was recorded on England’s Isle of Wight and produced by Paul Butler (Michael Kiwanuka, Devendra Banhart). Watch Bernhoft play Islander track “Come Around” on “Conan” here.

Bernhoft is the solo project of multi-instrumentalist and composer Jarle Bernhoft. Norway-born and New York-based, Bernhoft has become known for his intricate and complex live performances, built around Bernhoft himself as a looping one-man-band.

Stephen Vicino is the founder of MusicExistence.com. He created this site to give talented musicians a voice and a way to be discovered.
@@svicino
Previous I Capture Castle Breaks Through “Paper Walls” with New Single/Video
Next Check Out mUsa’s “UP”