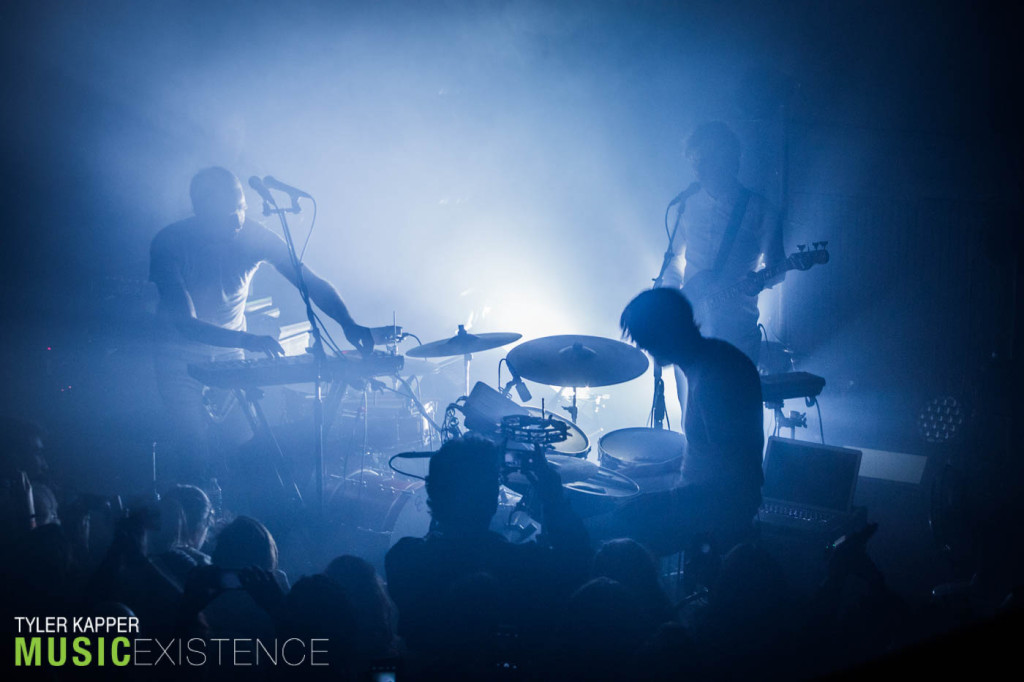 After arriving at the Fitzgerald’s Music Venue in Houston,TX on Saturday Night, I noticed the wide diversity of culture backgrounds already taking their spots in front of the stage. Couples against the walls chitchatting about their excitement. Individuals on their phone, probably posting on social media about how lucky they are to be at this historic venue attending a sold out Caribou show (I was one of them). Well dressed, casual dressed, girls in pretty hats and shiny skirts and boys getting drinks at the bar. Something that really stood out was the smile on every face; we were all ready enjoy the rainy night with good music.

First on the stage was Jessy Lanza. The venue darkened and a vibrating blue light shined on the Canadian artist as she began her electric/bass and beautiful soothing voice performance. Jessy’s set consisted primarily of tunes from her 2013 record, Pull My Hair Back and has been touring with Caribou since early October this year. The smooth R&B feel and vocals slowly upping to a more fast pace dance-electro beat that Lanza delightfully sets forth the perfect mood for Caribou’s mix of visuals and sound. They are an immaculate combination and the crowd has been oh so grateful.

After Jessy walked off stage, surely feeling accomplishment at hyping the crowd, we got a glimpse of Dan Snaith adjusting his mic stand and lights on stage for the show. Shortly after, Dan and the additional live show members, Ryan Smith, Brad Weber, and John Schmersal took their place on stage composed of a variety of keyboards, synths, guitars, and two drum sets. The venue lights turned off and the laser light extravaganza commenced.

The 90 minute set kicked off with title track”Our Love,” and slowly progressed through the new album. They also incorporated a few tracks from the 2010 record, Swim, which hyped the dance party even more. A few of the highlights included the return of Lanza on stage to sing “Second Chance,” “All I Ever Need” and “Your Love Will Set You Free,” all from Caribou’s 2014 Merge release, and the extended encore performance that had everyone dancing non-stop to the music’s rhythm and light show.

Having never heard of Caribou until a few weeks prior to the show, I must admit the comments “Caribou is great” and “Caribou puts on an awesome show” aren’t enough to showcase the incredible experience of being in the same room as these guys. The perfect combination of unique ambient sounds, psychedelic beats, and emotional lyrics kept the show exhilarating although it was pouring outside. It’s safe to say that Caribou is something for everyone to listen and truly enjoy.