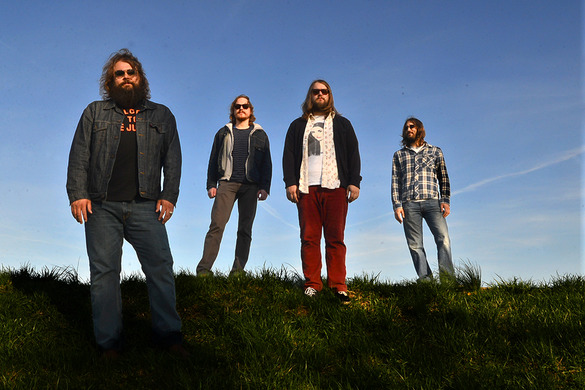 “‘Fireball of Sulk’ is our seventh studio album,” says Gabbard. “We are super proud of that fact. It’s really unheard of for a band these days. We’ve made more records than all my heroes.“

“Our albums really reflect where we are in a particular moment,” he continues. “Once the album is finally released, we have traveled six to 12 months on the road, and we are so far from that point of creation that to hear it again is exciting on many levels – we finally get to share the material with everyone and we have enough distance from it, that we can enjoy it in an all-new way.”

He also shares some perspective on the creative process: “From a songwriting standpoint, I had a time-traveling experience.  I was working ‘Weird One’ and recalled a song that I had written 15 years ago, ‘Marshmallow Mouth,’ and resurrected it for this album because they are both reflecting on my youth – only one was written during that time and the other, as a man 15 years older, reflecting on that time period.“

Fireball of Sulk (produced by Jim Wirt at Crushtone Studios) is a follow up to Heavy Reverie, the full-length that landed Buffalo Killers a spot on last season’s Last Call with Carson Daly. The record is available along with exclusive merch and each purchase comes with an instant download of the song “Marshmallow Mouth.” Physical copies of Fireball also include a second bonus disc with all the songs from Heavy Reverie.

Stephen Vicino is the founder of MusicExistence.com. He created this site to give talented musicians a voice and a way to be discovered.
@@svicino
Previous The Golden Hippie Release Video for “Human Animal”
Next How Sampling Shapes Hip Hop