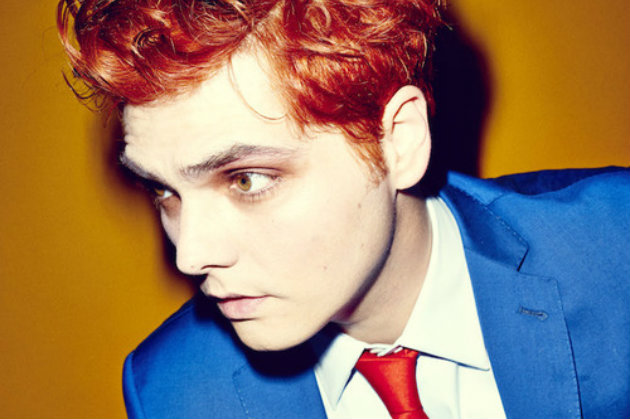 The last time I saw Gerard Way on stage, I was standing in the baking sun amidst thousands of music lovers packing the Asbury Park Boardwalk for the 10th Anniversary of the Bamboozle Festival. It was May of 2012, and (unbeknownst to us at the time) it would be My Chemical Romance’s very last show. Having seen them twice before on the Danger Days tour, I can attest to Way’s presence at 2012’s Bamboozle as being decidedly lackluster – a point that he confirmed months later in regards to the split. The inspiration was gone, the energy deflated.

Fast-forward two and a half years. The Gerard Way that stepped onto the stage at NYC’s historical Webster Hall was a re-energized creature. Dressed in his glam-rock-best blue pressed suit with his shock of brightly-dyed red hair reminiscent of the Danger Days era, Way stood before a cheering crowd of old and new fans alike starved for their taste of his latest musical offering.

His solo debut album, Hesitant Alien, may not be palatable to some fans of his previous body of work with MCR, as the material is decidedly lacking MCR’s patented angst and darker theatrics. Way’s overall stage presence however, shines through with distinctive inspiration. Hesitant Alien is a new moment for him. With an amalgam of influences spiraling in from the Britpop era, the album is not without its introspection, especially given Way’s lyrical brilliance. Live, the performance rings loud with clean vocals and guitars unburdened by an overwhelming amount of fuzz (considering the noise pop-heavy nature of the studio recording.)

For those familiar, there is no grand departure for Way as an engaging front man, intermittently pausing between rock rifts to address the flock of his audience with messages of support and positivity. He speaks as he always has with both experience and empathy to the plight of youth in volatile social climates, but not to divert—the evening was about rock. Winding down the penultimate days of the CMJ Music Marathon, Way and his band, The Hormones blazed through the entire roster of Hesitant Alien, grinding out obvious crowd pleasers like “No Shows” and “Action Cat.” The set was padded by a fantastic cover of the Jesus And Mary Chain’s “Snakedriver,” as well as two Hesitant Alien B-sides: the Japanese-only release “Television All The Time,” and an unnamed piano ballad which showcases the raw power of Way’s voice better than most tracks on the album itself.

Despite the creative divergence from the material that elevated My Chemical Romance to the top of the alt-rock charts, the new sound still encompasses the spirit of Gerard Way as an artist. Though he may have traded in the funerary garb for a style reminiscent of vintage BritPop legends, Iggy Pop and David Bowie, Way’s performance still comes on strong, theatrical and undeniably intimate. He appeared humbled and thankful for the packed turnout at Webster Hall and the undeniable flurry of support from his fans. It was his third show in the NYC/NJ area, and the last stop on the US leg of the tour. From here, Way will travel to Europe. See the upcoming tour dates below.