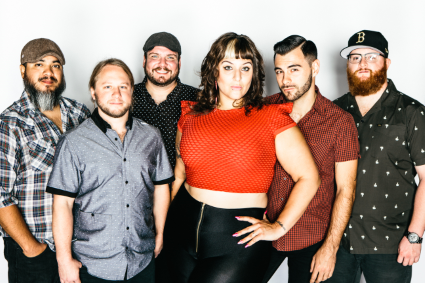 Rarely does a band make an impact as quickly as Alanna Royale has.  On August 14, 2012, the sexy sextet arrived at The Basement in Nashville to play its first show, and left with a roomful of dedicated fans.

Combining the best elements of rock, pop, funk and soul, Alanna Royale is led fearlessly by Alanna Quinn-Broadus, whose soulful voice and suggestive, spicy swagger are just part of what gives the band its signature sound.  She’s backed by a remarkable rhythm section – Jared Colby on guitar, Gabriel Golden on bass and Matt Snow on drums – and a tremendously talented two-piece horn section – Kirk Donovan on trumpet and Diego Vasquez on trombone.

Without a single recorded song, Alanna Royale was able to obtain an impressive fanbase and a reputation for delivering unforgettable live performances.  In January of 2013, the band released its debut EP, Bless Her Heart, which led to sold-out shows across Nashville and prompted Mike Grimes, owner of the world famous Grimey’s to declare the band, “the next big thing.”

Alanna Royale shines bright by marrying smooth, retro roots with dirty Rock ‘n Roll attitude. Since the release of Bless Her Heart, the band has shared the stage with some of Nashville’s finest, and made appearances at Bonaroo, Austin City Limits, East Nashville Underground and Music City Roots. They’ve been featured in Garden & Gun and Nashville Lifestyles and on NPR.

Proving to be unstoppable, Alanna Royale has just put the finishing touches its full-length debut, ACHILLES.  Recorded at The Bomb Shelter in Nashville, the album was engineered and produced by Andric Tokic (Alabama Shakes, Hurray for the Riff Raff), and features a revolving door of local talent including members of Los Colognes, Fly Golden Eagle and Lynyrd Skynyrd.  “We were pushed to the boundaries,” shares Quinn-Broadus, “and we came out on the other end with an amazing record.”

ACHILLES is scheduled for release on the 16th of September, 2014.

Stephen Vicino is the founder of MusicExistence.com. He created this site to give talented musicians a voice and a way to be discovered.
@@svicino
Previous FOUR YEAR STRONG ANNOUNCES “THE GO DOWN IN HISTORY TOUR”
Next VATTNET VISKAR added to Maryland Deathfest 2015 line-up