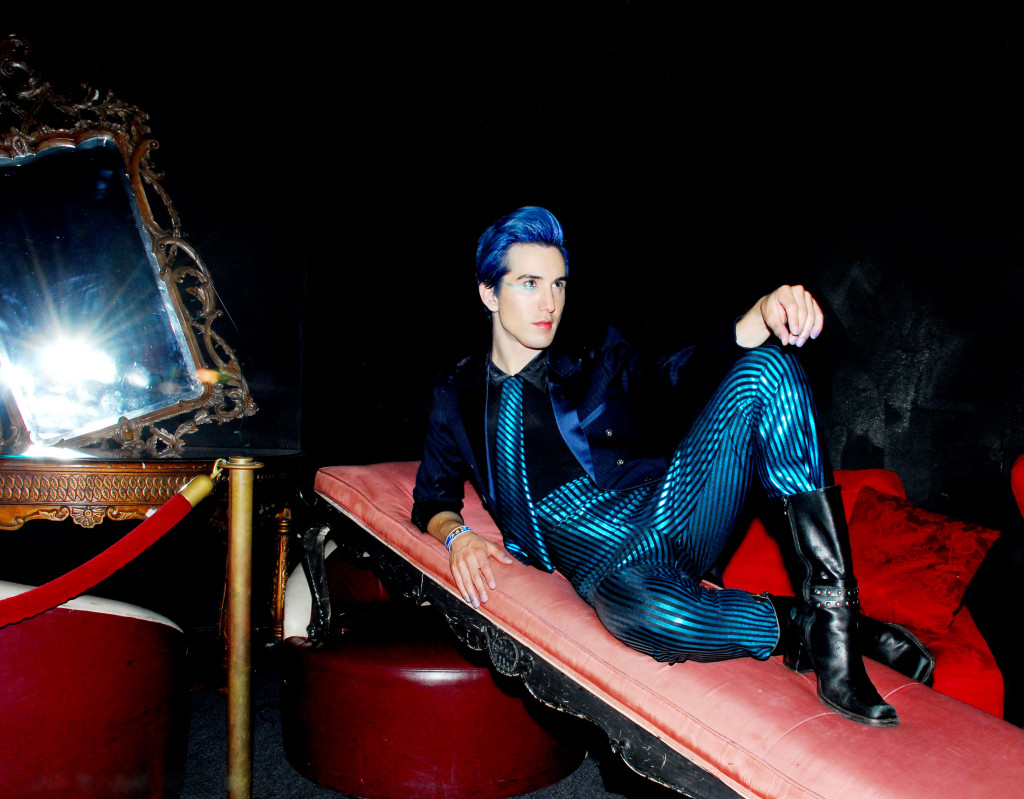 What is the story behind The Blue Album? The Blue Album is a collection of songs that I wrote during the time that I changed my hair blue. Blues have more fun. The album is defined as being light blue and dark blue. You can not have one without the other.

What was it like working with Madonna and Michael Jackson when you where in No Authority? Those two artists are my King and Queen of Artistry. Being signed and discovered by Michael Jackson and then to be signed on to Madonna’s label Maverick Records at such a young age is an honor. I want to live up to that legacy. I consider myself to be an outstanding performer above all else and that is what these artists do best. I have nothing but mad respect for both of them.
How was working with My Chemical Romance? I love the lead singer Gerard Way. He was the one who created the character Showpony that I played in their videos. He was very hands on on set. It was awesome to watch him work and to take control of the whole project. I was very inspired by him. Working so closely with Gerard Way and MCR, was one of the main catalysts for me releasing my own music and becoming Rebel.

What is next for Ricky Rebel? Ricky Rebel is going to find a booking agent and set up some tour dates. I am itching to get on tour again and perform. I miss the life. I also want to meet all my fans from around the world.

Where can we find your music? You can find my music on iTunes, Spotify, and Amazon MP3. I am also going to be selling hard copies of my new CD “The Blue Album” with a 16 page booklet that looks immaculate. I am very proud of the packaging.

Will we see you on tour? Yes, hopefully soon. We just got off performing our CD release Party at our residency venue Bar Sinister in Hollywood and performing at CBS Studios in the first “Rock The Goats Music Festival” which raised funds for Heifer International (a non-profit organization that helps to feed villages in developing countries all around the world). A major tour is just around the corner. Log on to RickyRebelRocks.com for all up-to-date Rebel news.

Thank you so much,
-Rebel

Then: Ricky Rebel, then known as Ricky Godinez had worldwide success as the lead singer in the pop group No Authority that was signed to Michael Jackson’s label (SONY Records) and later to Madonna’s Maverick label. The group released two albums, toured Europe twice, opened for Britney Spears and had a hit song called “Can I Get Your Number.”

Now: In 2010, Ricky Godinez became Ricky Rebel and My Chemical Romance invited him to star as “Showpony,” one of the main characters in their set of videos for “NA NA NA” and “Sing”. In 2012, Ricky released his “Manipulator” LP that included music featured on the hit MTV animated series “Good Vibes” and was awarded ARTIST OF THE YEAR at the 2012 RAWards. Now, his recent 2013 single, “Geisha Dance”, just spent ten weeks on the Mediabase Chart (The chart that powers “On Air with Ryan Seacrest”). Ricky is currently in the studio to finish his forthcoming album, “The Blue Album”, with plans to release the album in early 2014.

Stephen Vicino is the founder of MusicExistence.com. He created this site to give talented musicians a voice and a way to be discovered.
@@svicino
Previous Xander Demos
Next Mashmouth – What’s My Trouble Again? The Best Thing Ever