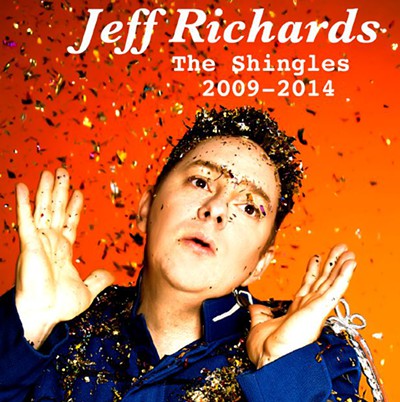 “I always wanted to be weird,” admits Saturday Night Live veteran Jeff Richards.On his new album, Jeff Richards: The Shingles 2009-2014, which came out last week, he reaches new levels of musical-comedy weirdness, combining dance beats and lyrics as weird and out-there as they come.The performer discovered a talent for impressions when he was young, creating a public-access show in high school and a local sketch series upon graduation. While attending the University of North Carolina he joined improv troupe CHIPs and hosted open mics at Raleigh comedy club Charlie Goodnights. Originally from Walnut Creek (outside of Oakland), Richards moved to Los Angeles in 1997, becoming a Comedy Store regular soon after. But the Conan, Kimmel and Comedy Central vet quickly found far more prominent outlets for his weirdness. In 2000 he joined Fox’s MADtv, then starting in September 2001 spoofed the likes of Dr. Phil, Louie Anderson and Dustin Hoffman on SNL. When his first cast table read postponed by 9/11, an air of uncertainly surrounded his first days at work. “We had basically two weeks before the first show, and that was just trying to keep it real basic and simple. Light and fun. My first show I played a fish.” Though his Weekend Update character “Drunk Girl” caught on, he was still relatively new to the arduous demands of corporate television, feeling out of his element in New York and admittedly partying too much. He left the show ten episodes into his third season, ultimately more relieved than upset. “I wanted to leave and they wanted me to leave — I was never told why — so it just worked out,” he recounts. “I got a call from one of the producers during one of our breaks saying that was it. I remember feeling okay with it… It’s a difficult show, so I wasn’t too hard on myself.” Today, Richards nevertheless thinks fondly of his tenure on the sketch institution. “I will always appreciate SNL,” he enthuses. “I had the best time.”

After returning to L.A., Richards regained his stand-up legs and took to GarageBand, focusing on a new breed of musical comedy. Working with musicians Ben Seaward, Brandon Christy, Peter Von Pinnon and John Sanders he eschewed the clever acoustic-guitar ditties popularized by the likes of fellow SNL vet Adam Sandler up through duo Garfunkel & Oates, who are debuting their eponymous new series August 7 on IFC. Richards’s output is instead experimental and eclectic, something akin to next-level Reggie Watts by way of electronica and dubstep. Above all, the songs are defiantly, joyously weird. (Sample lyric: “Lightning could strike you dead / Slip in the shower, crack your head / Tricked by an ex-wife with an improvised explosive device / Ripped apart by horses or stomped by horses or kicked by a horse or just fall off a horse” from the addictively hummable “Someday You Will Die.”) “You can laugh at it, and you can dance to it,” Richards explains. “I used to go out and dance, and no matter how I danced people would laugh at me, so I just wanted to make something that was the max percent of that feeling.” The full-length Singles includes six highlight tracks from previous efforts A$$WAX and Rain Makes Me Wet, plus new numbers “Def Wanna F,” “Tracking You,” “Your Brain” and “Muscle Bitch.” The latter serves as the album’s de facto single complete with a music video incorporating sinister British accents, animation, Richards in a marching-band jacket and an elderly bodybuilder flexing in a unitard.

In addition to continuing to tour as a standup, Richards envisions playing private dance parties as his musical alter ego, or, much like the hit-and-miss tradition of comedians warming up crowds before headlining bands take the stage, opening for established DJs. Currently living a block over from Sunset Boulevard venue the Laugh Factory, Richards has explored additionally uncharted territory in his personal life. Looking to lose weight and save money, he decided to lay off the drinking. Now two years without alcohol, he finds it “way easier” to write songs now. “I wasn’t even that big a drinker,” he says. “Being sober for me was just making a logical decision.”Following an early-morning tumble from his previous home’s deck that resulted in a busted right elbow, Richards is also prepping for surgery addressing the lingering injury. Though his arm will be out of commission for three months, he’ll continue performing both locally and on the road, and has been shooting a recurring role on Rob Schneider’s in-production sitcom Real Rob. “I still don’t know if I know what I’m doing,” he confesses of his big-picture plans. “I’m not real scientific about it. Not calculating… Either way, this is a new chapter.”

Stephen Vicino is the founder of MusicExistence.com. He created this site to give talented musicians a voice and a way to be discovered.
@@svicino
Previous D-Menace “Get Down” Directed by Gil Videos
Next The Littlest Birds – Live & Lucky