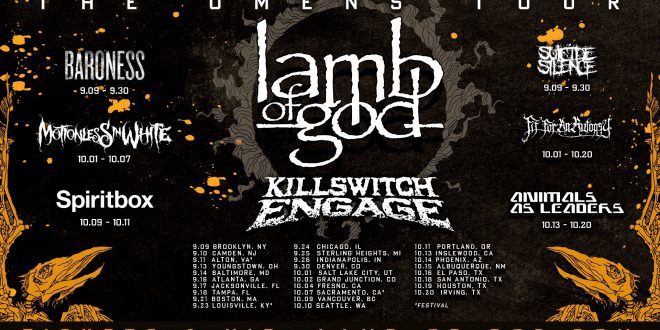 Lamb Of God, the New Wave of American Heavy Metal architects will support their forthcoming album with a massive Live Nation produced U.S. headlining tour, The Omens Tour, featuring headliners Lamb Of God + special guests Killswitch Engage on all dates. Different legs will also see support from Baroness, Motionless In White, Spiritbox, Animals As Leaders as well as Suicide Silence and Fit For An Autopsy. The tour kicked off September 9 in Brooklyn and runs through October 20. Tickets on sale now at lamb-of-god.com.

“Two decades ago, Lamb of God, along with Killswitch Engage, were a part of a new wave of American heavy metal music. Our scene grew from a small, loosely connected network of underground shows in basements and warehouses, into a global phenomenon that helped define an entire generation of modern heavy metal. We are thrilled to announce The Omens Tour, which celebrates not only the perseverance and impact of that original movement, but also the creativity and originality of the bands that it influenced. Heavy metal is alive and well. The Omens Tour proudly showcases the depth and diversity of our scene. This is not a tour to miss.” – Mark Morton

Lamb of God follows 2020’s No. 1 Hard Rock Album with a vicious new testament. Riding high on a creative renaissance saluted by the likes of Rolling Stone and NME, the Grammy-nominated goliath returns with the gloriously unhinged Omens, produced by longtime collaborator Josh Wilbur (Korn, Megadeth).

“Omens” tour dates are as follows:

LAMB OF GOD with KILLSWITCH ENGAGE, SPIRITBOX, FIT FOR AN AUTOPSY

LAMB OF GOD with KILLSWITCH ENGAGE, ANIMALS AS LEADERS, FIT FOR AN AUTOPSY 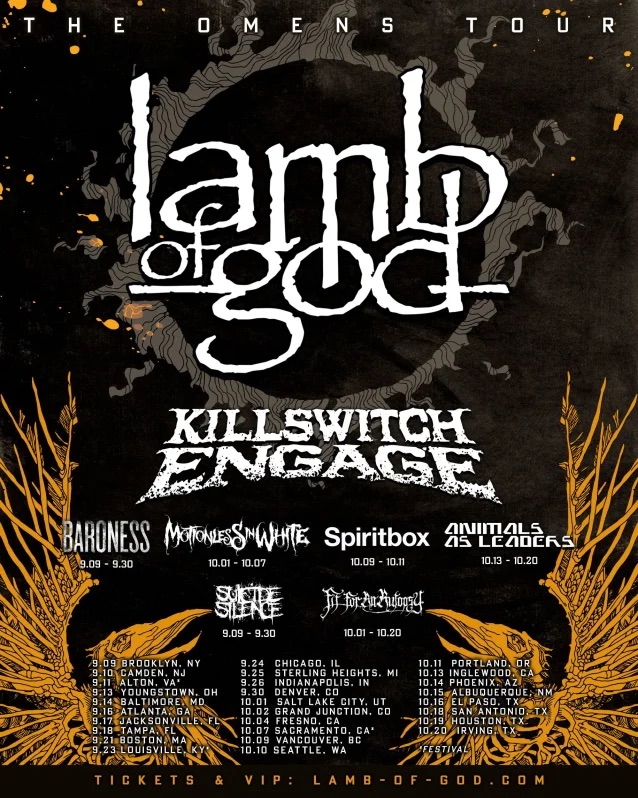