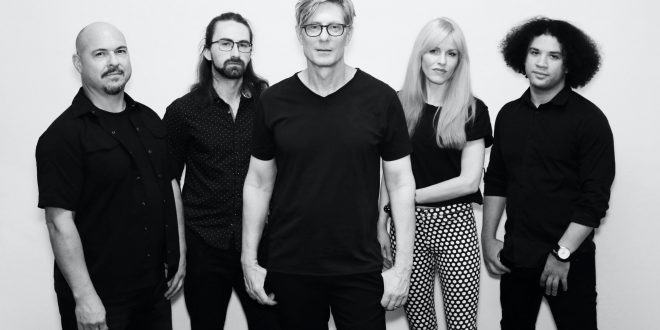 Phoenix, Arizona quintet Electric Sol have returned with Lucky Day, the much-anticipated full-length follow up to 2020’s City Tonight EP. Since its release back in mid-May, Lucky Day has been earning considerable reception through streaming services thanks to initial buzz from previous singles, and consistent features on numerous playlists worldwide.

The album’s titular track promptly makes its mark with a memorable chorus, and in just the first few measures of the song. This is executed well, as the warmth of the synth melodies and bass groove conjunctively bolster the hook as the song progresses. From a thematic standpoint, the song’s subject succumbs to a girl’s seductive charm, to the point where her cut-throat manipulation registers to him as simple lighthearted, push-pull flirtation. Eventually, after repeated exposure to her methods, he snaps out of her spell, recognizing the reality of his situation and regaining his sense of agency. The tracks to follow, “One Chance at Love” and “Gotta Know”, sustain the album’s hook factor while, at the same time, veer more toward a breezy, breathable approach, vocally and instrumentally. Both tracks share prominent, vivid bass lines and involved pads, as well as a similar thematic angle of being particular when searching for love. While the first feels dreamlike and allud to heightened self-confidence, while the other is more linear, and more so grounded in humility. “Closer Girl” and its answer track, “You Love Me” mark the album’s mid-point, and represents a positive scenario where such love is reciprocated. The sense of calm emitted from the instrumentation works well in conveying the sincerity on both sides, with the guy admitting he’d feel comfortable taking things slowly, and the girl assuring him that his actions are respectable and valid.

On the latter half of the album, the perspective shifts to acknowledging the importance of self-care amidst trying times. “Running In Place” deals with the perception of lost identity, that any kind motion taken feels futile in the face of an indifferent, seemingly unchanging society. On the other hand, the instrumentation is spacious and to a degree, hopeful, suggesting that the theoretical loop someone finds themselves in during a slump is only momentary, rather than infinite. As an expansion of that angle, “Why Do We Dance” emphasizes pushing forward despite feeling trapped, and overwhelmingly aloof from everyone else. Once again, the song has a good amount of space around it, so that the handful of elements used in the track sound clear and fill it nicely. In one finale note of triumph penultimate and final tracks, “I Believe In Love” and “My People,” represent the rise out of rock bottom. In some way, it essentially reinforces the sentiments of the album’s opening track – noting the nature of a struggle and accepting that, while it may seem overwhelming, it is not unbearable, and that the support system that similarly seems out of reach was there all along.

Overall, Lucky Day is Electric Sol’s seamless transition into a full-length setting. The band’s signature neo-retro sound especially highlights the album’s tracks, all of which function as a collection of summer-based vignettes that focus not only on the thrill of romantic heat, but the realization of self-trust, as well as the consistent support of a close group of friends. Now with the season in full swing, let this album serve as the ideal soundtrack to a summer well spent.

I come from a family who is passionate about all things music. I learned to sing at an early age, and by 13, had my very own Fender Strat guitar. I tried my hardest at learning all that I could. Because I was born with cerebral palsy, I had to teach myself an adaptive playing style. I learned to write and record my own music, despite these difficulties. In college, I started making great use of my writing abilities by reviewing music, as well as copy editing. I guess it's best to stick with what you know, while welcoming a fair challenge at the same time.
Previous Greg Puciato shares new album Mirrorcell early via Bandcamp
Next AZ THE WORLD BURNZ Releases Official Music Video for “Counterfeit Dreamer”!