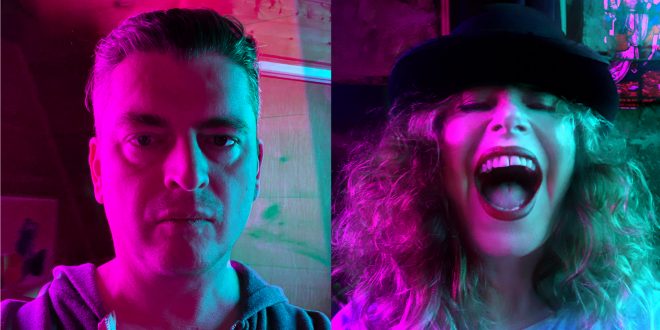 Ready, Steady Die! are a British-American electronic music duo comprising New York-based Morgan Visconti and London-based Sam K. Together they have already released a debut album back in 2020, symbolising their quite usual and sonically diverse sound. They explore the immersive sounds you can now delve into, and deliver a unique offering that will captivate many with ease. ‘Pleasure Ride’ saw big success for the group, with singles ‘Woebetide’ and ‘Deep’ in particular striking a chord and showcasing their startling offering.

The multi-talented pairs sophomore album ‘Accidents’ is out on March 11th, and introduction to this was their take on Soft Cell’s ‘Say Hello, Wave Goodbye’ released January 6th. It’s a low-key, electronic version reflecting on the song’s original ballad style, but done so in such a charismatic way. They now return with the incredible lead single and video to go alongside in ‘Kiss It’. The video, directed by Max Clendaniel is brilliantly done and executed, with a clever use of shadow puppets throughout reflecting the bands style and sense of humour.

‘Kiss It’ is grungy, dark and commands a presence from the get go with Sam’s haunting vocals once again taking to the fore. The deep lying synth bass then plays underneath, further setting the scene before it cascades into the anthemic chorus, filled with those heavy guitar chords and a melody line that will catch with ease. Ready, Steady, Die! Have certainly evolved since their stylish debut, and continue to make their mark. Their heavy 80s influences still carry through in ‘Kiss It’ but there is also an understated character that this duo are building, and they are only heading in one direction.

Q: The instrumentation on this album is gorgeous and varied. Especially for a duo. How did you decide which instruments/sounds to highlight?

A: SAM: Thank you.  I kind of hold the privileged position of taking a handful of ideas to someone (Morgan) who mucks about with it, then I muck about with it a bit more and then I get given back a finished beautiful product, so I think I’ll hand this question over to him….

MORGAN: For this album we wanted the percussion to be front and center. It’s less of an immersive dreamy sound like our first LP (Pleasure Ride). This time some of the subject matter is more confrontational and violent! For Accidents I used sounds of bits of wood from the forest behind my house snapping for the “snare drum” which I learned is a common foley artist trick for getting the sound of breaking bones. Settle, which is about abuse, is based around pencils tapping, as if a distress signal is being tapped out. Stop has some clangs, creaks and groans from an old oven. It became a sort of pandemic cliche to use sounds from around the house! To counter all that percussion we enlisted the Ardeton String Quartet in Bristol, UK, who added all of this lovely warmth and humanity which we’ve never been able to create with samples.

Q: What are the pros and cons of being in a duo? Would you ever grow the band?

A: SAM: Morgan and I have written songs for decades together and it’s pretty seamless.  I don’t think there has ever once been even a niggle with what either of us have come up with. We’re predominantly a studio band so between the two of us we’re self sufficient.  Having said that, we have used some incredible artists on our album ACCIDENTS including Ardeton String Quartet.

MORGAN: I think neither of us work well with too many cooks in the kitchen. We’ve done several non-RSD projects over the years and we always had to succumb to someone else’s vision which has never been satisfying for us. We almost gave up on writing music together several times until we decided, “Let’s just do this our way”. As Sam mentioned, working with experts on the musician and engineering side is always a good thing.

Q: “Kiss” is a badass song full of massively sexy lyrics. As a listener it’s hard not to exclaim “Oh damn!” at regular intervals. Was eliciting that kind of response part of the intent of the song or is the audience reaction more of a byproduct of the overt expression of sexuality? (sam: don’t forget it’s Kiss It – not Kiss)

A: SAM: Firstly, thank you so much! Also this is an interesting question. I think as the predominant lyric writer for RSD, I do want to write about things that are worth discussing. And I think there is always intent in getting a reaction, otherwise what’s the point? So I would hope that every song on our album could be the starting point of any discussion. Your “Oh damn!” means that worked. Yay!

Q: What’s the relationship between sexuality and music for Ready, Steady, Die!? How important is that interplay between sex and art in general?

A: SAM: “Kiss It” is probably the most blatantly sexually referenced song we have to date (until ‘Don’t Pass the Buck – it’s you I Wanna ****’ –  coming up in album 3).  Though ACCIDENTS seems to have addressed all possible areas of relationship including darker topics such as gaslighting and abuse.  In fact Morgan came up with a story which linked each song to the next so I’ll let him tell you about that in a moment. But I think sex, music and art have forever been intertwined since time began haven’t they?

MORGAN: I imagined the same person, protagonist running through all the songs on the album. In one song (Settle) she’s in a harmful relationship. In another (Island) she’s imagining blissful escape while in Kiss It, perhaps she meets someone who really ignites that passion again. Those 3 songs are almost a mini trilogy for me and I purposely let them run into each other at the start side 2 of the album.

A: SAM: Morgan and his visual FX film company Weekend Class have produced and directed all of our videos to date and then I met director Max Clendaniel at a mutual friend’s photography exhibition in the UK. We chatted and I told him about the ideas that Morgan and I had about naughty puppets for our naughty new song. Max said “I’m on it”. He got it immediately and told us to leave it to him to bring in his clever team of animators IMMIX MEDIA to take our idea… then play with it a little – then play with it a little bit more – then play with it A LOT more and then – – – CLIMAX.

Q: If you had unlimited resources at your disposal, what would you envision for your dream live show?

A: MORGAN: Definitely string players, a great drummer. I’d love to get away from just me bopping my head over a laptop. I’m most naturally a bass player. I’d love to just do that and share the stage with Sam and some great musicians. And then… maybe somebody makes a movie of the aforementioned story that’s projected on towering screens behind us.

Stephen Vicino is the founder of MusicExistence.com. He created this site to give talented musicians a voice and a way to be discovered.
@@svicino
Previous DYMBUR Release Official Music Video for Socially Charged Single, “Rape Culture”!
Next Ocna – “Can’t”