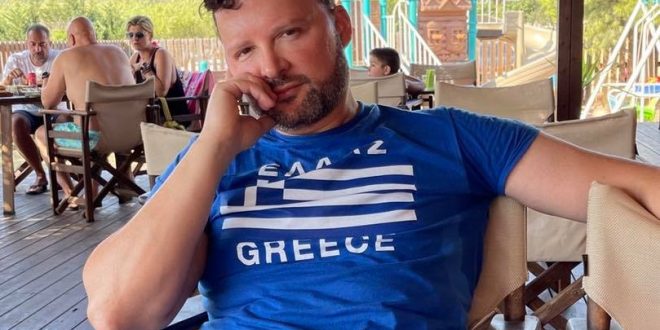 The Chicago-based artist has released “A Spoonful Of Greece.” It’s the follow-up to his #1 international iTunes smash, “I Feel You.

2021 proved to be a huge year on the international charts for Chicago-based singer-songwriter and multi-instrumentalist, Sarantos. The enigmatic artist topped the iTunes charts in both the United Kingdom and South Africa. His most recent single, “I Feel You” hit #1 on the UK iTunes Christian singles chart, while “Every Songwriter Needs To Spend Some Nights Here In Nashville” hit #1 on the South African Country Singles chart. It’s his eclectic style that has made Sarantos one of the most interesting and enduring artists of the past several years.

Now, Sarantos is following up those #1 singles with an ode to his Greek heritage. “A Spoonful of Greece” is his latest single and video: “Thought I’d throw something out into the world to make you fantasize about what you’re going to be doing this summer,” he says. “This flirtatious world pop song is so different than most songs out there. It combines lyricism, folk music, middle eastern sounds and makes a tapestry of all those different conflicting styles.”

Watch the video at https://youtu.be/nCtPL_khAiw.

Sarantos recently enjoyed a song placement on the longtime daytime drama, “The Young and the Restless.”

ABOUT SARANTOS: Sarantos is a DIY international award-winning solo music artist, #1 iTunes UK Charting singer-songwriter, #1 iTunes South Africa Charting Folk & Country artist, proud nerd, multi-instrumentalist, book author, comic book nut, radio show host, poet and part time spy. His music is a cross between Justin Bieber, Queen, Journey & Ed Sheeran. He’s an alien who landed here to infect the human race and spread the disease of music. 2022 is Year #9 of his journey as he continues to release a new song, lyric video, music video, book chapter and poem every month bringing his music to life! In 8 years, he has released 16 albums with 202 original tracks as well as 8 fiction/fantasy books that parallel the songs! He has had numerous media placements for his songs, instrumentals & cues.