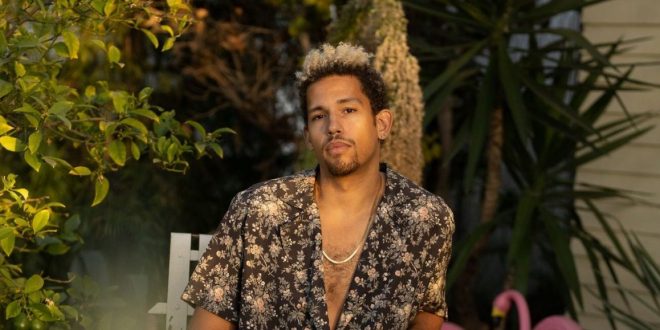 Noah McBeth is a singer/songwriter and producer from Heidelberg, Germany. The godson of R&B legend Chaka Khan, McBeth records music under the name NoMBe, beginning with 2014’s Change of Hearts EP. Since then, his music receives acclaim everywhere from such publications as Rolling Stone Australia, Hollywood Life, and Ones to Watch, and even fellow musicians Elton John and Pharrell Williams. In fact, not even a month into its release, McBeth’s latest album, Chromatopia, an ambitious 14-track concept experimenting with indie rock, dance, and soul, has accumulated over 14 million streams on Spotify alone.

Today, NoMBe releases the accompanying music video for the album’s ninth track, “This Is Not A Love Song.” As a retrospective look at his past relationship gone awry, the video follows NoMBe staring bleakly in the mirror. Both cool and popping color palettes comprise the various locations the mirror is positioned in, while the music’s dreamy, yet somber tones complement his facial expressions. Throughout, the states of the mirror seem to represent shifting extents of his low point, from full length to obscured within the water to a single shard. However, even while projecting a sense of gradual loss following his heartbreak, NoMBe exhibits an enduring sense of grace, echoed just as well in the subtleties of the music.

I come from a family who is passionate about all things music. I learned to sing at an early age, and by 13, had my very own Fender Strat guitar. I tried my hardest at learning all that I could. Because I was born with cerebral palsy, I had to teach myself an adaptive playing style. I learned to write and record my own music, despite these difficulties. In college, I started making great use of my writing abilities by reviewing music, as well as copy editing. I guess it's best to stick with what you know, while welcoming a fair challenge at the same time.
Previous Buddy Sixnineseven: On The Road And In The Studio
Next MONOTRONIC RELEASES THE SONG “LIVIN’ IN A LIE” ON JUNE 11 WITH A VIDEO TO FOLLOW