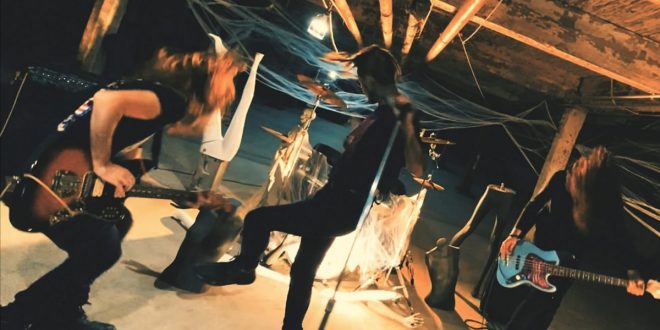 Deadlight Holiday is a Grand Rapids, Michigan-based industrial rock band. Debuting with the album Path of Desolation in 2018, they would solidify their national stature early on, opening for such big-name acts as The Birthday Massacre, Psyclon Nine, September Mourning, and Combichrist. The very next year, they would receive endorsements from Seymour Duncan Guitar Pickups, Haunted Labs, and GHS Strings, as well as secure a featured guest spot at the Summer NAMM show.

These days, the band sticks to an output of singles, the latest being “Daybreak,” released earlier this month. Instantly, the song’s main riff hooks the listeners in, utilizing chunky distortion on the surface and a haunting internal lead melody. The drums, jagged as they are bluntly hard-hitting, work to bolster the intensity of this involvement while also providing it a danceable groove. A definite highlight of the song is its vocals, initially sung in a kind of whisper during the verses, but then unleashed with an especially melodic asset, harkening back to the days of late 90s/early 2000s nu-metal. While the song continues to gain traction, it is a solid representation of the band’s sound thus far.

I come from a family who is passionate about all things music. I learned to sing at an early age, and by 13, had my very own Fender Strat guitar. I tried my hardest at learning all that I could. Because I was born with cerebral palsy, I had to teach myself an adaptive playing style. I learned to write and record my own music, despite these difficulties. In college, I started making great use of my writing abilities by reviewing music, as well as copy editing. I guess it's best to stick with what you know, while welcoming a fair challenge at the same time.
Previous GLASS HELIX Releases Self-Directed Music Video for New Single, “Control”!
Next Single Review: Nocturnal Animals “LHW”