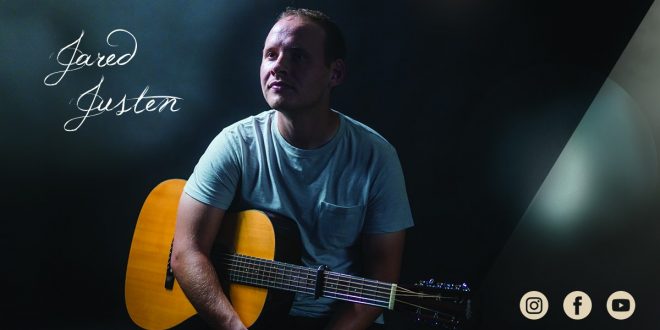 Singer/songwriter Jared Justen started his path as a civil engineer at the University of Minnesota. While also a prolific poet in his spare time, he would stick to his new year’s resolution of learning guitar, and gradually further his understanding of how to implement simple, yet complex techniques into his songwriting. This October, the Minneapolis native will put out Wolves Teeth, based on the success of his 2018 debut, Sky Align. Commenting on the process of the previous album, Justen stated,

“My approach to this record was more about singing and simplifying the guitar work. I was aiming to give it a more popular sound.”

Similarly, Wolves Teeth retains a distinctive guitar-oriented indie-folk sound – taking cue from such acts as Riverside, Anathema, and especially Jose Gonzalez, one of Justen’s foremost influences – as well as a thematic expansion of his experiences with mental health. The new album centers around Justen recalling a bleak time of his early adulthood. Having suffered through a pronounced bout of anxiety, he began equating the battle against his fears to “facing the teeth of hungry wolves.” It is this extent of heart-on-sleeve that punctuates the authenticity of his music, and without a doubt, a substantial follow-up.

I come from a family who is passionate about all things music. I learned to sing at an early age, and by 13, had my very own Fender Strat guitar. I tried my hardest at learning all that I could. Because I was born with cerebral palsy, I had to teach myself an adaptive playing style. I learned to write and record my own music, despite these difficulties. In college, I started making great use of my writing abilities by reviewing music, as well as copy editing. I guess it's best to stick with what you know, while welcoming a fair challenge at the same time.
Previous Darkwave Trio Johnathan|Christian Releases New Video & Single “Every Day It Rains” – A Song For Trying Times
Next Magnolia Bayou share video for cover of Eddie James “Son” House Blues Hall of Fame Inducted “Preachin Blues'”