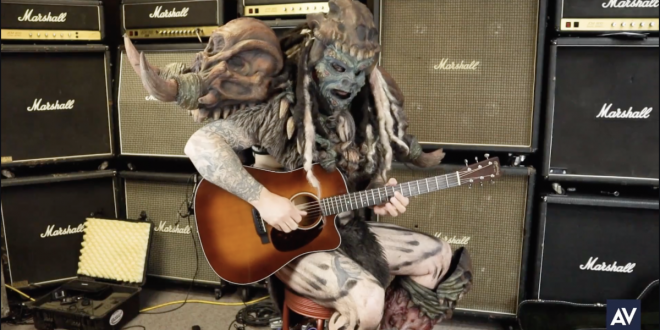 3
SHARES
FacebookTwitter
The AV Club has had the honor of being blessed with the presence of your Lords and Masters GWAR, five times so far. Taking part in the AV Club’s Under Cover series, the Scumdogs of the Universe gave their take on songs including: Kansas’ “Carry on Wayward Son,” Billy Ocean’s “Get Outta My Dreams, Get Into My Car,” Pet Shop Boys’ “West End Girls,” Cyndi Lauper’s “She-Bop,” and AC/DC’s “If You Want Blood.”
Since there is no band on Earth or anywhere else that can match the sheer awesomeness of GWAR’s cover versions, the AV Club decided to task GWAR with their toughest challenge yet. An acoustic set. Yes that’s right, early during the quarantine, frontman The Berserker Blothar, guitarist Pustulus Maximus and guitarist Balsac the Jaws of Death teamed up over Zoom from their Antarctic fortresses for an exclusive four song acoustic set. Watch as they play stripped down versions of GWAR anthems: “Fuck This Place,” “I’ll Be Your Monster,” “Gonna Kill You,” and “The Road Behind.”
Watch the epic performance below.
“I love the AV Club, and as everyone knows we are the undisputed heavyweight champions of their cover song contest, so it made sense for us to do this ridiculous acoustic project. I’m also hoping this helps bring ridicule on all the po-faced indy rockers groaning into their laptops and pretending to care. Look how easy it is to suck! Anybody can do it,” says The Berserker Blothar.
Guitarist Pustulus Maximus adds, “Basically I’m going to quit metal and play these unplugged wooden guitars from here on out. There was no better place to debut my new career choice of playing Antarctican folk music than the AV Club.”

NewYork Based Photographer. Music Enthusiast with a background in Graphic Design. Whether I'm shooting a live event or just out wondering the streets its about capturing the moment.
Previous PRIMAL FEAR Release New Single And Video “Hear Me Calling”
Next Aftershock Festival Rescheduled To October 7 – 10, 2021; Metallica & My Chemical Romance To Headline; Festival Expands With Addition Of Fourth Night