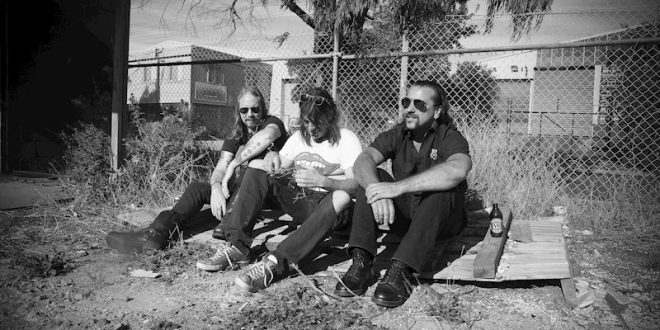 Part punk, part thrash and 100% rock and roll, Silverlight Shadows are a high octane trio who go for the throat. Formed in 2016 by meetings through mutual friends, Silverlight Shadows recorded their eponymous debut album after a mere handful of jam sessions. Ever prolific, the band dropped another full length, ‘Headspace’ in 2017, the herald of years of hard work to come. Fusing the sounds of bands like Magic Dirt and Tumbleweed, these Jason Fuller produced madmen want to take on the world.

Never a band to shy from the hustle, Silverlight Shadows have built a reputation on powerful live shows defined by their driving riffs and demolition drumming. Behind this though, they hold a deep well of content. This ranges from the exclusive artwork they collaborate on with their talented friends to the three high quality music videos they have dropped since their inception. It has even manifested in special editions, including an exclusive run of 27 hand painted vinyl copies of their debut album by artist Benjamin Phillips Nozrachev

Now Silverlight Shadows are looking forward to the release of their next single, which will come on a split with Monarchus and promises to see them evolve their sound ever further. With a long history of garnering devout fans, they have earned a place as regulars on their local PBS and Triple R stations. Now as they take the next step they want to grow with the global rock underground in mind. Seeking to bring a new breed of heavy rock out of the Antipodes, Silverlight Shadows are about to blast off!

“Black The World” is available now for streaming via Bandcamp and from iTunes, Google Play, Spotify & Apple Music.