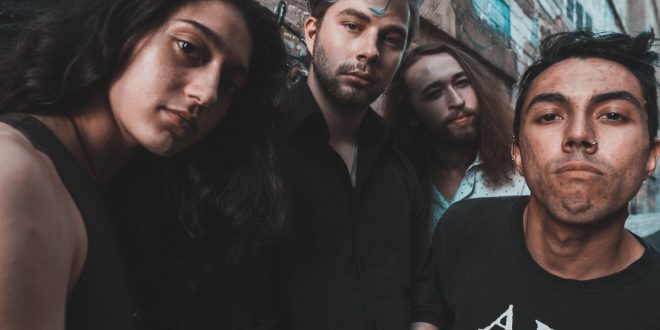 Dumpweed? Like, the blink-182 song? You bet your ass. Although the NJ quartet is rooted in pop punk, their new single “Commitment Is A Dirty Word” injects a darker throwback AFI vibe, complete with mysterious imagery and lightning-fast melodies. The official music video was released today along with their third record The Golden Snake.

“‘Commitment is a Dirty Word’ is a battle between a mother and father dealing with the pain they’ve caused each other,” says vocalist Eric Palermo. “It’s destructive and chaotic and it shows the domestic struggles many married couples have. Unfortunately, for one reason or another, people mistreat and hurt each other. Here’s our interpretation of how that feels and the damage it does to both the people involved and the world around them.“

“Commitment Is A Dirty Word” fits in with a larger theme of the record, consisting of domestic issues and how they affect both married couples and their children.

“Of course it means whatever you want it to mean as well,” says Eric Palermo. “For ‘Commitment is a Dirty Word’ on the surface it sounds like ‘you cheated on me and now my life sucks,’ but it goes a bit deeper than that. Here we have one parent cheating on the other, and the other makes it a living hell for their spouse and the rest of the family.“

The song portrays the pain a child witnesses when they realize their parents aren’t perfect, and the coping mechanisms associated with that pain.

Eric Palermo elaborates “Do you drink and slowly get addicted to drugs and then spiral into a deeper low and find the world doesn’t have anything to offer? With our song ‘Lucky Ain’t So Lucky,’ that’s about turning the pain and sorrow into something beautiful and constructive. It’s about finding the silver lining and persevering, and that’s what ‘The Golden Snake’ is; perseverance and understanding that there is hope and we are all valuable and important. Of course, when the going gets tough we just need to speak about what’s going on instead of suppressing and ‘self medicating.‘”

In the two years since Dumpweed formed, they’ve shared the stage with legends like Black Flag, Madball, Agent Orange, Murphy’s Law, Leeway, and of course have spent countless nights playing basement shows. With influences ranging from old school punk, hardcore, emo, and everything in between, they write songs about growing up and facing both social and internal issues. The mantra is individuality, and the pursuit of understanding and being yourself. “Kindness is free, let’s spread it.“

Listen to the single “Commitment Is A Dirty Word” and the new EP The Golden Snake now on Spotify.