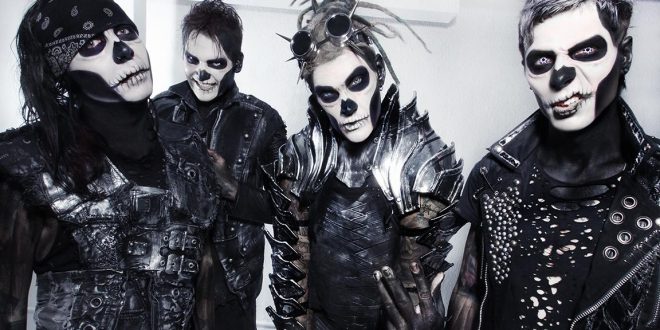 2
SHARES
FacebookTwitter
Industrial goth/rock quartet Davey Suicide will release their fourth studio album ‘ROCK AINT DEAD’ on January 24, 2020 via Out Of Line Music/InGrooves.
Pre-order ROCK AINT DEAD now at www.daveysuicidemerch.com
DAVEY SUICIDE premiered the music video for the album’s title track on Thursday, October 24, via Alternative Press who described it as “A cross between George Lucas’ 1971 sci-fi thriller THX 1138 and a titillating vampire movie (with a slight tribute to Aphex Twin’s ‘Come To Daddy’).”
Directed by Richard Villa III of Exhibit A Gallery, the video takes place in the year 2039 in a dystopian society that has dissolved the rock genre. Watch the “Rock Aint Dead” video in full below. (Note: Skip ahead to the 6:13 mark for just the single.)

NewYork Based Photographer. Music Enthusiast with a background in Graphic Design. Whether I'm shooting a live event or just out wondering the streets its about capturing the moment.
Previous Carach Angren Enter Studio To Record New Album
Next Abigail Williams Releases New Single “Ever So Bold”