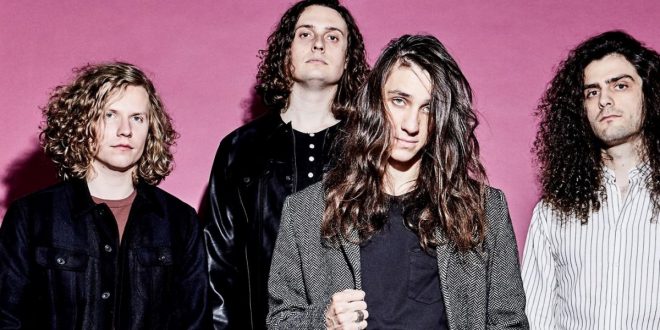 When you’re surrounded by beach bums and surf seekers, growing a local music scene might not be an easy task. Despite being a short drive away from the entertainment capital of the world, scheduling places for a young rock band to play in Orange County was never easy for Joyous Wolf. Just ask frontman Nick Reese, who spoke to Music Existence last week about their humble beginnings and the horrors of trying to make it in Hollywood.

“There were a couple bands you know, but when we first started out there really wasn’t anything. There was no place for a young rock band to play. Beggars can’t be choosers, so we would just take whatever was available.”

“At the beginning we were local, and then once we got to Los Angeles we were playing The Strip constantly and playing The Viper Room a crazy amount of times. The Whiskey A Go-Go, The Roxy, all those places would have us play there and that’s really where our career started.”

Recently, films like Mötley Crüe’s The Dirt brought back the edgy glamour and legacy of The Sunset Strip, which many music fans associate to be the most iconic street in music. Just don’t tell that to Reese though, he warned us of how these famous institutions are actually operating in today’s musical landscape. “It’s a dump. It’s a place that’s there you know the clubs, or most of the clubs I’ll give The Viper Room a big pass here, a lot of these clubs are just robbing young bands. You know doing pay to play tickets, where’s the pride in that? I don’t care if The Whiskey A Go-Go is legendary it doesn’t matter if the sound system sucks and the crew is unsavoury…..the strip is trapped in the 80s, its last golden era.”

Despite iconic clubs desperately attempting to hold onto the glory days, the band was still able to find organizations that thrive on fostering new and young talent in the rock world. The Viper Room helped launch Joyous Wolf, as well as The Danny Wimmer Presents festivals like Aftershock, and Louder than Life. The boys have also been asked to tour with everyone from Deep Purple to Slash featuring Myles Kennedy & The Conspirators. The tour stints with Slash would foreshadow a big steppingstone for the band who eventually signed with the same label as Slash; Roadrunner Records.

Under Roadrunner, they released their debut EP Place in Time. The 7-song release might be longer than a typical EP, but the band didn’t want to consider it their debut full-length album just yet. “Eventually we settled on it just being a large EP, you know we wanted it to be what it is… it’s this moment in time and these are the songs we wrote and what we have and who we are.”

Their latest single off the EP is “Quiet Heart”, the melodic heavy hitter that has made its way on radio stations and rock playlists across the country. The song is big. It has a small club vibe with an arena anthem attitude. Any fans of Mother Love Bone would thrive off this track, but Reese refuses to acknowledge any similarities between his band and the pre-Pearl Jam establishment.

“Never even remotely. I don’t know, I feel like I’ve heard everything at this point, and I think people just want to put a sticker on it, and if you really think about it does that really remind you of that?”

“Speaking of Pearl Jam, you can go back and read some of the original things coming out, people were saying he (Eddie Vedder) was the next Jim Morrison. Which is silly because now people don’t really put them in the same boat, but I feel like that’s just what it is. Whatever the first incline of an idea is, that’s what people will grab onto, and that’s fine.”

After their current run with Deep Purple, Joyous Wolf will head into the studio to begin recording their debut full-length album. Despite what trends many in the industry have adopted, the band still prides themselves on being able to write and release a complete LP. “That’s the testament. You want to put out a single every month like rappers do and do it that way? You’re going to find that people really aren’t going to be invested much in what you’re doing, because you don’t have anything to say.”

During the time this interview was taking place, The U.K. was celebrating “National Album Day”, the music lovers holiday designed to celebrate the concept of listening to an album from start to finish. When Music Existence asked Reese what his favourite albums to listen from top to bottom were, the frontman pulled out a list on his phone and began a tangent of musical education. His immense list included records like; Muddy Waters At Newport in 1960, Jazz by Queen and Violator by Depeche Mode. Needless to say, Reese’s passion for music during this interview wasn’t anything surprising. The band is known for putting on an electric live show, with Reese enjoying the challenge of impressing an unknown audience. He thrives off the attention frontmen receive and translates that energy into the rest of his bandmates. Joyous Wolf might just be another member added to the rock n’ roll revivalist class list, but if you’re looking for a band that has a lot more to say then Joyous Wolf is for you.