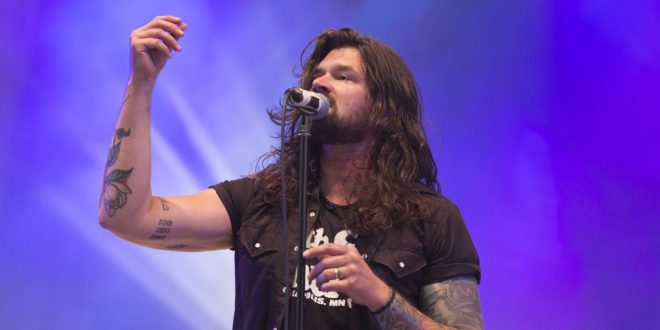 As alternative rock heroes Taking Back Sunday celebrate two decades together, Craft Recordings is pleased to announce a remastered vinyl reissue of the album that started it all—the band’s genre-defining 2002 debut, Tell All Your Friends. The LP will be available on October 4th as a wide release, while a special edition—pressed on iridescent color-morphing green vinyl and limited to 1,000 copies—will be for sale exclusively via the band’s website and on tour (while supplies last). Tell All Your Friends propelled the Long Island, NY band’s career, bringing them worldwide recognition and critical acclaim and going on to sell over one million copies worldwide. This reissue comes as part of a yearlong 20th anniversary campaign for Taking Back Sunday, which has included the retrospective collection, Twenty, exclusive content and an extensive worldwide tour.

Following the release of a five-song demo in 2001 and a year of nonstop touring, the young band went into the studio with producer Sal Villanueva to record their debut. With its tongue-in-cheek name (the band anticipated that the album’s success would be largely dependent on word-of-mouth), Tell All Your Friends blended pop with emo, hardcore and punk. The album’s anthemic melodies, relatable lyrics, driving guitars and tight songwriting resonated with fans and critics alike.

Highlights off the album, released in March of 2002, include the dramatic and sonically lavish first single, “Great Romances of the 20th Century,” which tells the tale of an inevitable breakup; the darkly catchy “Cute Without the ‘E’ (Cut From The Team),” which helped popularize emo and post-hardcore music with the mainstream; “You’re So Last Summer,”about the brevity and intensity of summer flings; and the poppy “Timberwolves at New Jersey,” in which the band reminisces about their early days together.

With a good start for a relatively unknown band, Tell All Your Friends would sell 2,300 copies in its first week, enough to have tastemakers take notice. Album sales would grow steadily—and mightily—over the course of the year and would be a testament to the grassroots efforts of the band, their label and their fanbase. Thanks to nonstop touring and the emerging power of online fan communities like Yahoo Groups, Myspace and peer-to-peer file sharing, Taking Back Sunday soon found themselves selling out headlining shows, performing a few East Coast shows on the mainstage of the 2003 Warped Tour and sharing the stage with bands like Blink 182, the Used and Saves the Day. One year after its release, Tell All Your Friends had surpassed 100,000 units and was certified Gold by the RIAA in 2006. The album’s enduring popularity prompted a 10th anniversary Tell All Your Friends U.S. tour in 2012, and a live, acoustic version of the album, TAYF10 Acoustic, a year later.

Tell All Your Friends has been widely acclaimed as a breakthrough album in its genre. Alternative Press called Tell All Your Friends “the record that changed everything,” adding that it was “as close as it gets to a modern masterpiece…. It will never be duplicated.” The BBC praised the band’s “ability to write fantastically catchy songs that are poppy and fun as they are upbeat and emotionally aggressive,” while Drowned In Sound prophetically declared, “This is the start of a movement.”

The current line-up—vocalist Adam Lazzara, guitarist and vocalist John Nolan, drummer Mark O’Connell and bassist Shaun Cooper—have been through a lot together. The band, in its various formations, has released seven albums to date (four of which were in the Billboard 200 Top Ten, and three of which earned gold records). Taking Back Sunday have evolved from being key players in the early 2000s alternative rock scene to becoming a genre-defying rock band, never ceasing to push the limitations of their sound.

To mark their 20th anniversary, Taking Back Sunday have partnered with Craft Recordings to celebrate their career-defining moments and landmark albums. In January, the campaign kicked off with the band’s very first retrospective, Twenty, a 21-track compilation spanning all seven of their albums. Kerrang! called it “a phenomenal mile-marker for both the past and present,” adding that it “shows off just what [an] important band Taking Back Sunday were, are, and will continue to be.” Currently, the band is on an extensive celebratory worldwide tour, with dates running throughout 2019.

Click here to pre-order the remastered LP edition of Tell All Your Friends.

Click here to pick up a copy of Twenty.

Stephen Vicino is the founder of MusicExistence.com. He created this site to give talented musicians a voice and a way to be discovered.
@@svicino
Previous Lucid Ending – Twenty Miles (Live From Royal Studio)
Next Single Review: Just John – “Far Away ft. Myah Marie”