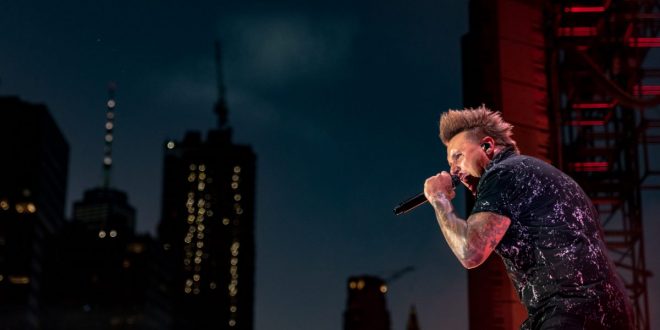 Theres no better way to end your weekend in New York City during the summer then to be spending it on a rooftop along the waterfront taking in the view of the beautiful New York City skyline, now add Papa Roach, Asking Alexandria, and Bad Wolves live on that same rooftop and your Sunday night just became explosive. Thats exactly what went down Sunday August 11th on the Pier 17 Rooftop at New York City’s South Street Seaport as it played host to Papa Roach’s Wo Do You Trust Tour.

The evening got started off with the hard hitting Bad Wolves taking the stage as the shows opener. The band started off their set with their debut single “Learn To Live” off of 2018’s Disobey. Bad Wolves continued ripping through their set with “No Masters” playing with sheer intensity and giving the crowd that in your face style the band is known for as Vext bounced  from one side of the stage to the other and taking flight from the stage risers. The band would then tone things down a bit with the emotional “Remember When”. The show seemed to be both a bit more special and emotional for frontman Tommy Vext then others in the sense that it was a hometown show for the frontman who had grown up right in Brooklyn. Vext let the crowd know that both his mother and sister were I attendance and asked the crowd in a joking manner to not make him look stupid as he told everyone in the crowd to get it jumping to the start of “I’ll Be There”. During the bands set Vext also shared emotional stories with the crowd of being a suicide survivor and letting everyone know that no body should feel that taking their own life should be a solution, Vext urged those to reach out and to not feel alone. Bad Wolves went on to close out their set with their own version an incredible cover of The Cranberries “Zombie”, with the state the world is now in and level of positivity the band brings it was only fitting for this song to be the last you heard as bad Wolves said their thank you’s and left the stage.

North Yorkshire’s very Asking Alexandria kept the rooftop party rocking as they took the stage and blasted straight forward with their latest single “The Violence”. Frontman Danny Worsnop showed up definitely ready to rock this New York City rooftop properly decked out in a tweed 3 piece shoot with a pair of dapper black suede loafers and some yellow aviators that would end up in the hands of one lucky fan as Worsnop passed them on before moving forward with “Into The Fire”. With little words to be said in between songs the band continued pounding out their 11 song set mostly composed of material off their self titled album 2017’s Asking Alexandria that ended with “Alone in a Room”.

As the sun set and moon rose, with bright lights of the New York City skyline surrounding the rooftop it the time that everyone had been waiting for. It was time for Papa Roach to finally make their way out on to the stage. With the band making their way out onto stage slowly one by one to the roar of the crowd as they cheer in excitement, it was then a dark silhouette of Jacoby Shaddix appeared walking out onto the riser taking stance with his raised high against the giant illuminating led screen in the background. With the crowds roar heightening in volume Shaddix and company wasted no time bringing an immediate energy, opening with the brand knew material “Who Do You Trust”. The band then took it all the way back to their first LP with “Blood Brothers” before tapping into one of their many hit singles “Getting Away With Murder”.  The band kept the energy flowing as their set was a well mix of the old and new material, actually after opening with the title track to their newest LP Who Do You Trust, it wasn’t until the sixth song in the set did they hit the fans with the more of the brand new material when they delivered “Elevate”. Some of the other highlighted songs of their set included “Scars’ and “Born For Greatness” which would close out the set before the bands encore that include their breakthrough hit single “Last Resort”. The bands encore also saw a tribute too late Prodigy frontman Keith Flint with a cover of the bands “Firestarter” which had everyone in the crowd bouncing so hard that you could actually feel the rooftop floor vibrating. The night would then come to a closing with their hit single “To Be Loved”, which seemed to be in sense the theme for the evening. The show saw enormous positivity between all the bands and the fans with emotional messages about love and support, and how music brings people together.

Another more emotional highlight from the bands set was when Shaddix introduced a fan named Mark to the crowd letting everyone know that mark is always at their shows, always in the front rocking out the hardest, Mark has even featured in one of the bands videos. Shaddix had Mark brought up on stage from the front row behind the barrier to let Mark know just how much the band had appreciated him as a fan, knowing what Mark had went through and how their music helped him get through his struggles Shaddix told Mark that they wanted to do something special for him and give him a gift and presented Mark with a Platinum plaque, not only did they present Mark with a Platinum plaque but they furthered that by giving him what they call the Diablo Pass, a pass that’s good for any show anywhere for life. All this lead back to what Shaddix had said during their set when he thank everyone for being here tonight and supporting Papa Roach through the highs and lows, allowing the band to do what they love to do for 20 years living out their dreams and making music, also letting the crowd know we are all family.

I would later find out after the show while backstage and meeting Mark who is also a huge WWE wrestling fan that he band also gave Mark a replica WWE Championship belt. I know there are a lot of bands out there that do things like this for their fans but to witness it first hand and see the emotions and the joy on the face of the fan and to personally meet them was truly heartwarming and emotional for myselas well. Hats off to Papa Roach this will be an experience witnessed that I won’t ever forget.

NewYork Based Photographer. Music Enthusiast with a background in Graphic Design. Whether I'm shooting a live event or just out wondering the streets its about capturing the moment.
Previous City and Colour announces new studio album, A Pill for Loneliness
Next Slayer Pulled As Primary Sponsor Of Rick Ware Racing’s Entry No. 54 Car At This Weekend’s Bristol Motor Speedway