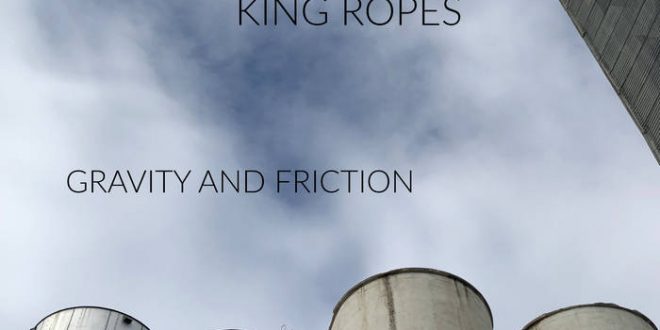 King Ropes are back this summer with some of the most brooding and physically engaging rock songs of the year in their brand new album Gravity and Friction. Gravity and Friction sees King Ropes departing from the softer tones of their first record, 2017’s Dirt, and stripping away the pop varnish from their sound almost entirely. Even the ballads on this record boast more of a wallop than I was expecting to find, and if you’ve been in the mood for a different variety of rock that doesn’t exclusively lean on the staple songcraft of bygone eras in the genre’s storied history, then this is an album that you have to hear.

All of the tracks on this LP show us a different layer in King Ropes’ multidimensional identity, but I think that “These Days” is probably the most inspired composition here. It’s not as rough and tumble as most of the material on the record is, but its homespun harmonies and noise-influenced backdrop makes Gravity and Friction feel a lot more diverse in the grander scheme of things. It’s the perfect song to end the album, and perhaps one that could be manipulated into something even more evocative in a live setting.

The title track, “Brown” and “Butterfly Joint” are a bit more expressive in an instrumental sense than they are a lyrical one, but their verses don’t feel like filler in the least (nothing on Gravity and Friction does). Every now and again, King Ropes gets a little too indulgent with their existential poetry for mainstream consumption, but they’re pretty good about keeping things on the straight and narrow in other songs here, like “Saint Peter” and “Giacomo’s Assistant” for example. No one can accuse this band of lacking duality, as their most recent batch of studio recordings verifies just how dexterous a unit they really are.

Unlike many of their peers, King Ropes aren’t toying with cosmetic surrealisms exclusively in Gravity and Friction; contrarily, almost every aspect of this music was constructed as to stimulate the listener with a dreaminess that is hardly commonplace in American pop music right now. “Mouth Full of Bees” and “California Stars” are probably the most postmodern of this pack, but they don’t minimize the experimental hue in the title track, “Saint Peter” or “These Days” at all. This is a balanced set of songs if I ever heard one, and it’s a good representation of who King Ropes are at this stage of their career.

I was definitely expecting a lot out of Gravity and Friction, but I didn’t have any idea that I was going to run into something as engrossing as this album certainly is. These songs are spellbinding, and even though there’s an obscure, unfamiliar feel to the nature of their harmonies – even at their most basic – I think that’s exactly why they stand out as much as they do this month. In a year that has left a lot to be desired among indie connoisseurs, King Ropes drop a heck of a statement piece in Gravity and Friction that those who hear it won’t soon forget.

Previous JOHN 5 and the Creatures announce second U.S. leg of their Invasion Tour
Next Gallery: Blink-182 and Lil Wayne at Dos Equis Pavilion in Dallas, TX 08.02.19