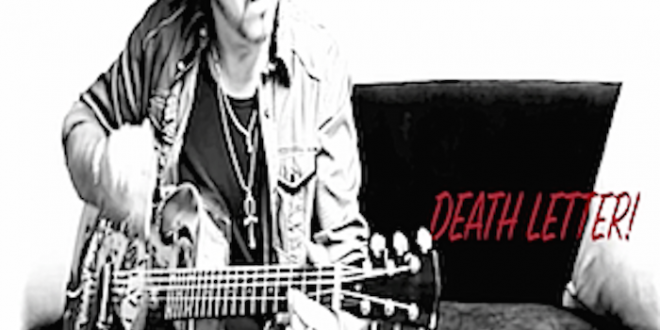 The chart-topping blues artist and frontman of hard rock band Babylon A.D. has released his cover of the Son House classic, “Death Letter.”

“His songs reveal an honesty, as well as a range of emotion and power” – Rock And Blues Muse

“Davis has done it again, producing a record that is a real joy to hear” – The Rock Pit

Lyrically, the song is about a man who learns of the death of the woman he loves through a letter delivered to him early in the morning. The narrator later views her body on the cooling board at the morgue, attends her funeral and returns to his home in a state of depression.

ABOUT DEREK DAVIS: After relocating to Los Angeles in 1989, Davis and his newly formed rock band Babylon A.D. soon caught the attention of the legendary music mogul Clive Davis, who signed the band to a recording contract with Arista Records at a private showcase. While at Arista Records, Babylon A.D. released two critically acclaimed albums: The self-titled “Babylon A.D.” in 1990, which reached gold status, and “Nothing Sacred” in 1992. The band’s first release produced three Top 10 songs on the A.O.R Metal charts: “Bang Go the Bells,” “Hammer Swings Down,” and “Kid Goes Wild.” Featuring the late, great Sam Kinison, It was also the trailer track in the Orion Pictures film “RoboCop 2”. The band’s sophomore release “Nothing Sacred” produced two more Top 10
metal rockers: “Bad Blood” and “So Savage The Heart.” With strong video rotation on MTV and constant touring, Babylon A.D. soon became one of hard rock fans’ most popular bands.