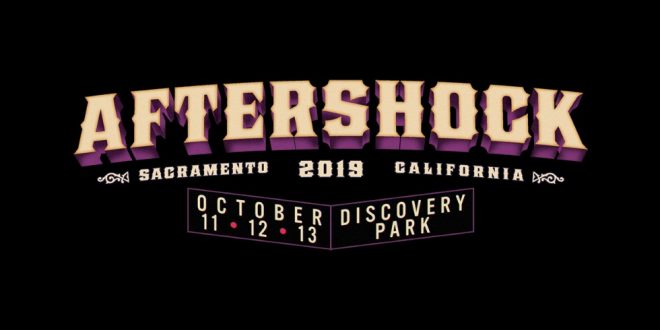 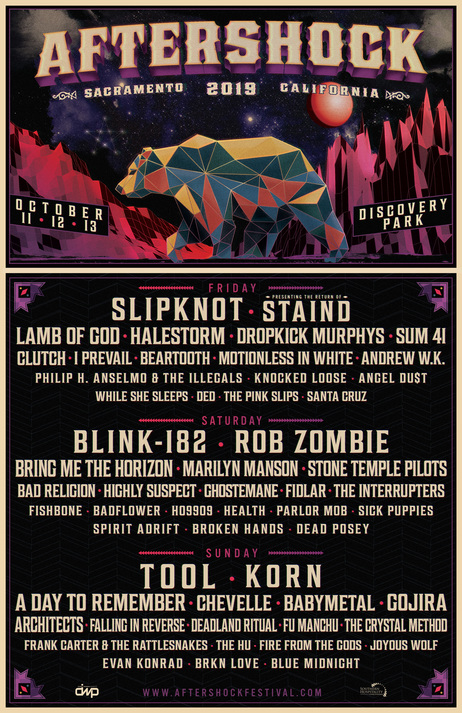 Bring Me The Horizon, A Day To Remember, Marilyn Manson,

Plus Special Onsite Collaboration With Metallica’s

After welcoming a sold-out crowd of 60,000 people in 2018, Aftershock returns even bigger this year, expanding to three full days of performances from some of the most popular music acts, including a mix of chart-topping headliners and up-and-coming buzzworthy bands across the rock spectrum. The eighth annual edition of California’s biggest rock festival takes place Friday, October 11, Saturday, October 12 and Sunday, October 13 at Discovery Park near downtown Sacramento, CA, and is produced by premier independent festival producer Danny Wimmer Presents.

The lineup features Tool, Slipknot, blink-182, Korn, Rob Zombie and the return of Staind after a 5-year hiatus. Additional acts include Bring Me The Horizon, A Day To Remember, Marilyn Manson, Lamb of God, Halestorm, Dropkick Murphys, BABYMETAL, Bad Religion, Stone Temple Pilots, and many more.

Korn’s Brian “Head” Welch says, “Aftershock Festival is always a unique experience for Korn compared to other festivals. One of the main reasons is we have many friends and family that live near Sacto, so it’s always like a family reunion when we play Aftershock. We’ve been gone a while and we’re coming back this year with a new album, new stage look, and a new excitement that is very contagious! We feel like we are on fire right now and our fans are gonna be fuel for the flames!”

VIP and General Admission tickets, as well as hotel packages, for Aftershock will be available beginning on Friday, April 26 at 12:00 PM PT. Visit www.AftershockFestival.com for more details.

The current music lineup for Aftershock is as follows (subject to change):

Danny Wimmer Presents is also proud to announce a collaboration with Metallica’s Blackened Whiskey and Enter Night Pilsner. Blackened, a super-premium American whiskey blend, crafted by the late Master Distiller Dave Pickerell and finished in the earth shattering music of Metallica, and Enter Night Pilsner, a collaboration with the rockstars of craft brewing Stone Brewing Company, will come together under one roof to offer guests a one-of-kind musical festival experience. The BoilerMaker pop-up will feature a Blackened & Enter Night Boilermaker, as well as craft cocktails and ice-cold Enter Night Pilsner. This exciting collaboration marks the latest in a long line of amplified guest experiences only available through Danny Wimmer Presents music festivals. More info to come…

In addition to performances from top music artists, attendees at this year’s Aftershock can enjoy a variety of local and regional food and beverage offerings provided by DWP’s affiliate concessionaire, Southern Hospitality Concessions LLC. Fan favorites like Spicy Pie Pizza, Island Noodles and Phat Daddy’s Creole will be available, as well as selections from local spots including Florez Bar and Grill, Pica Pica Arepas, and some of the best BBQ in town from Buckhorn BBQ and Big Joe’s. Sacramento’s thriving food truck scene will also be rolling up to the festival grounds with delectable dishes from Baconmania, Dogtown, Drewski’s Hot Rod Sandwiches, La Mex Taqueria, Hefty Gyros and Cousins Maine Lobster. Look for more food experience details to be announced soon.

Ticket prices for Aftershock will be as follows:

Tickets for Aftershock have sold out for four years straight. Fans are encouraged to buy early to save, and to secure a spot at this year’s event.

Aftershock is again offering a Park & Ride shuttle program, as parking at Discovery Park is extremely limited. Each Park & Ride ticket includes parking at Sleep Train Arena and a non-stop shuttle directly to and from the festival site each day. Festivalgoers are encouraged to carpool to Sleep Train Arena and enjoy this convenient way to get to Aftershock. For all pricing and more details, visit www.AftershockFestival.com.

Discovery Park is located at 1600 Garden Highway in Sacramento. Festival doors open at 11:00 AM daily.