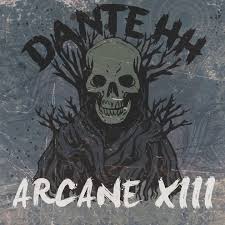 Los Angeles’ Dante HH, a five piece band and rare hybrid of punk and blues music, returns with the latest single from their Gunblade Blues Vol. II album entitled “Arcane XIII”. Originally formed eight years ago in their native Colombia, they relocated to Los Angeles in 2017 and bring a variety of influences besides punk and blues to their music – at their best, you will hear elements of hard rock and rockabilly creeping into the picture as well. They marry their musical and songwriting talents with a strong visual sense; the accompanying animated video for “Arcane XIII” is rife with gripping imagery complementing the song well. They pursue a busy live schedule proving that their unique sound has proven a hit in one of the nation’s most competitive music markets and evidence growth with each new release.

The punk rock influences come across in the song’s duration, a little under three minutes long, and the rambunctious go for broke chorus. We often associate punk music with a distinct, sometimes affected, lack of musical chops, but Dante HH possesses unabashed skill and you can hear it reflected in the tight compositional focus of “Arcane XIII”. There is no fat or dross included that might distract listeners and, after a brief wash of feedback opening the song, the band’s foot remains on the gas pedal for the entirety of the tune. It’s a song throwing off sparks from the outset and builds momentum as it progresses.

The two guitar attack courtesy of lead guitarist Gonzo and rhythm guitarist Alexx Black make a potent duo. Gonzo’s lead playing comes close to outright shred at certain points, but there’s much more rhyme and reason driving his six string work than you hear from many players who specialize in such a style. The riffing powering the bulk of “Arcane XIII” is memorable and has the necessary crunch to bulldoze listeners, but the rhythm section of upright bassist Keisuke Motoki and drummer Andy Summers II hold everything together with their assertive musical partnership.

Vocalist Kami Rayne brings rugged character to his singing and some backing vocals join him during the raucous chorus. The rugged persona he brings to the verses adds further rough and ready verve to the performance, but he also shows a true talent for phrasing that may surprise some listeners. The lyrics do not remake the literary wheel, but they are appropriate for a song in this style and not treated as an afterthought – like any good song, his vocal treatment elevates the quality of the words several notches. He’s a powerful and charismatic singer and brings a lot to Dante HH’s presentation. Those unfamiliar with the band but lovers of hard rock and punk will likely love this single release on first listen. Dante HH’s “Arcane XIII” delivers the goods in a muscular way, but never neglect shaping the song with an artistic touch reflected in the musical performance and video alike. It’s a full entertainment package and connects with a wallop.