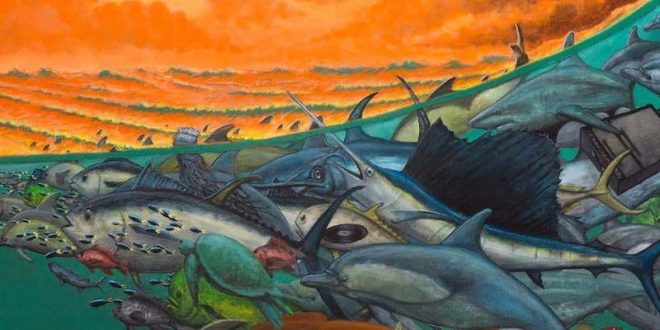 The intense interplay between expressions of longing grief and shining optimism lays the groundwork for Tedeschi Trucks Band’s fourth studio album Signs. The masterful musical soundscape could be painted only by collected talents of their twelve-piece ensemble, drawing inspiration from each member’s experiences and emotions to combine and conceptualize one cohesive production.

The band weathered the storm of tragedy during the writing and recording process of Signs. The passing of guitarist Derek Trucks’ uncle and Allman Brothers Band alumnus Butch Trucks, Gregg Allman and iconic mentors like Leon Russell and B.B. King left a heavy weight on the shoulders of the group. They coped with the pain and struggle by transforming it into an album overloaded with passionate fervor and rumbling homage to their passed loved ones.

The standout tracks are “I’m Gonna Be There,” “Still Your Mind,” and “The Ending.” The second track of the album, “I’m Gonna Be There,” truly emphasizes the talent and vocal ability of singer Susan Tedeschi. The powerful artistry in her voice takes the lead of one of the most controlled tracks off what felt like a jam-centric album. Its message of reassurance and security weaves “through the thunder and the rain.” Dancing melodies and driving harmony foster an Allman Brothers- feeling in “Still Your Mind.” Showcasing the talents of Derek Trucks, the nephew of legendary Butch Allman, this track could nestle easily into Eat A Peach without hesitation. Perhaps the rawest track on the album, “The Ending” reveals grief in its most pure, unadulterated form. It’s “looking in your soul and pulling it right out.”

Although stamped with blues influence and Americana notes, the Tedeschi Trucks Band’s sound is unparalleled. Formed by husband and wife Derek Trucks (guitarist and member of the Allman Brothers Band) and Susan Tedeschi (vocalist and guitar) in 2010, the group has remained steadfast in their family approach. In return, they’ve rightfully been lauded with two GRAMMY nominations – one for 2017 Best Contemporary Blues Album and the other for 2011 Best Blues Album, where Revelator took home the win.

Tedeschi Trucks Band’s commitment to their craft is exemplified by their relentless road schedule. They opened 2018 with a series of growing multi-night residencies that brought them to prestigious settings such as The Chicago Theater, the Warner Theatre in Washington D.C. and the Ryman Auditorium in Nashville, as well as two-night stands in LA, San Francisco Seattle. This year sees the band touring extensively across the states before arriving in Europe in April for a tour that includes two sold-out performances at the London Palladium on April 26th and 27th.