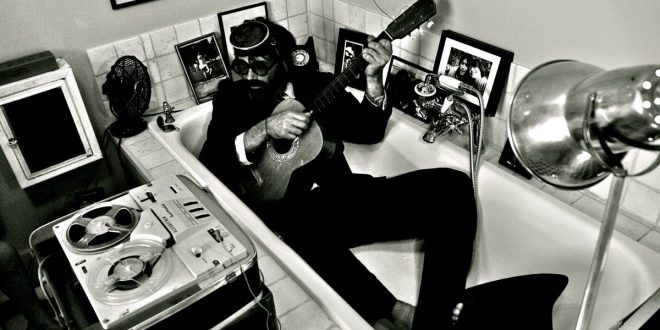 London show and new single for The Mostar Diving Club

The Mostar Diving Club is the work of writer, composer and lead singer Damian Katkhuda.  Latest single ‘Lovely Bones’ (as heard twice on BBC 6Music via plays from Lauren Laverne and Steve Lamacq) is taken from his fourth album ‘Here Comes Joy’.  Produced by Pete Hobbs of The Boy Least Likely To, jangly guitars, cellos, choirs and mellotrons combine to create an intimate musical landscape over which he reveals the wisdom of fatherhood:

Q Magazine |****| “an album of unexpected and welcome surprises”

Signed to BMG since 2001 and producing to date nine studio albums under different guises he has remained resolutely under the radar, choosing to go about his craft in his own unique way and style. The Mostar Diving Club is his latest project with four albums released under its banner; Don Your Suit of Lights (2008), Triumph of Hope (2013), Horizontal Hotel (2015) and Here Comes Joy (2018); you’ve probably never heard of him though you will of heard his songs which have been used widely in film and television to create unique and beautiful atmospheres on screen.  The songs have also been championed by Steve Lamacq and Laurene Laverne at BBC6music.

The music ranges from large scale productions to just a simple guitar and voice recorded in the garden. Recorder orchestras, violins with trumpet attachments, bowed saws, accordions, harmoniums, glockenspiels, banjos, auto harps and ukuleles are just a few of the instruments to be heard on these highly eclectic albums. They have met with great critical acclaim both here and abroad; “Don’t equate the lightness of touch Damian Katkhuda brings to his music with a lack of graft: the singer has been releasing magical folk-pop albums for years, never quite breaking through but affirming the notion that if you look beyond the charts you can strike gold. Infused with a born-melodist gift and straight-to-the-emotional-mains lyric writing, this music is plaintive and heart breakingly lovely, Pure gold.” (Sunday Times). The name, The Mostar Diving Club, is taken from a town in Bosnia where Katkhuda’s fathers’ family hail from; as a right of passage into adulthood, young men dive from an old bridge into a shallow river below, a distance of some thirty meters.