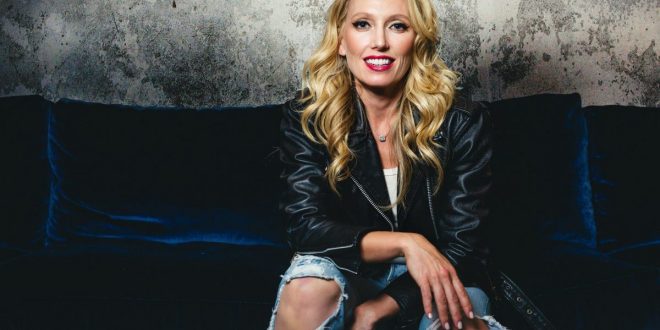 A wave of slick electronic energy crashes into us and washes everything within reach in colorful grooves. There’s a pulsating beat shoving its way to the forefront, demanding our attention and refusing to back away from the thick sonic heat. As listeners enter Brooke Josephson’s “Mr. Fix It (Rocky G Remix),” producer Rocky G doesn’t waste any time throttling us with every different strain of synthesized light she can possibly muster. Josephson acts as the centerpiece amidst all of the discord and rhythmic whirlwinds being dispensed around her, with the emotion in her voice our only beacon of hope in the center of the storm. Together the pair manage to put a very effective spin on a staple track of Josephson’s discography that was released just one year ago.

The framework of the original “Mr. Fix It” is still present in this track, but there’s no question that Rocky G magnified all of its most elaborate elements in the remix. The bass is much more suffocating while the drums are far more hollow and reverberating. An ominous mood is created by the harmony between the two, and it’s sumptuous to put it mildly. The main action centers around the interplay between Josephson and the synth melodies, but there’s so much going on beside their dueling that it’s easy to become hypnotized by the additional role players. Rocky G goes out of her way to avoid drowning Josephson’s singing in white noise however, and utilizes a very clean mix over her vocal tracks specifically.

I do think that this version of the track puts a lot more of an emphasis on the transmission of the lyrics than the original did. The music is very intense, but instead of intruding on the verses it cushions them from the blow of the grooves. The mix allows for there to be a little bit of space between Josephson and the instrumentation, which makes it much easier for us to zero in on her performance and isolate the grandeur of the individual musical parts as well. This is engaged listening if I’ve ever experienced it, and what’s more is that it doesn’t force us to endure some pointless diatribe in the verses.

Brooke Josephson continues to impress critics and fans alike with her stylish command over versatile melodies, and in Rocky G’s remix of her song “Mr. Fix It” she proves that her skillset isn’t limited to the realm of pop/rock alone. The evocative nature of her 2017 hit remains intact here, and with the assistance of her talented collaborator we’re able to experience her sound from an entirely new angle. As the verses break away from the modulating tempo of the drums in the first stanza, there’s a moment where Josephson’s voice and the bass become so in sync that it’s difficult even for trained ears to discern the two from one another. Their collective harmony is opulent, powerful and resistant to any other layer of instrumentation that we’re being presented with. Were it not for this remix, we may not have known just how in-depth Josephson’s reach as a vocalist really goes, which I personally think would be criminal to say the least.

Stephen Vicino is the founder of MusicExistence.com. He created this site to give talented musicians a voice and a way to be discovered.
@@svicino
Previous C.O.N Presents C.O.N ft Solokey – Wildin
Next Ducx – Right Now (Club Restricted Deep)