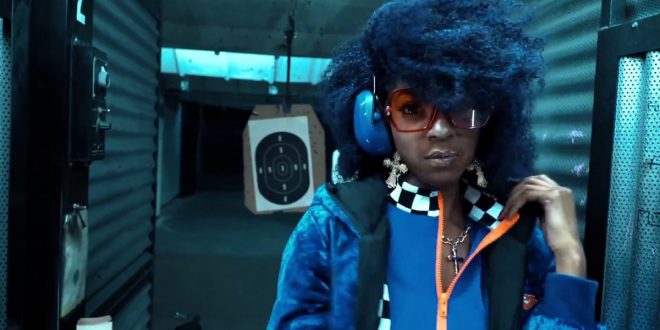 Kettie Munroe’s carefully crafted pop identity contains the groundwork for an auspicious music career. The Boston, Massachusetts native found her calling upon reaching her teens, while immersed in the sounds of 90s female acts – everyone from the Spice Girls to Aaliyah. From that point onward, she would gain the necessary confidence writing and composing her own songs. Her debut EP, Venus Flytrap, marked the beginnings of that utilization.

Off the success of her previous single “Puppet,” which has a modest but still impressive run of over 18 thousand hits, Munroe’s follow-up, “Kids Play with Guns,” fares similarly well. Both her image and stylistic leanings have continued to steadily contend on modern pop grounds, emphasis on vibrant color palettes and catchy, bass-deep rhythms. While “Kids” may come off as lyrically repetitive by contrast, its strengths lie in Munroe’s confident vocal delivery, as well as the general balance of diverse instrumental elements from a production standpoint. Like its predecessor, it holds up decently in representing what Venus Flytrap has on offer. In time, I’d like to see Munroe branch out and implement emphasis on her formative pop roots.

I come from a family who is passionate about all things music. I learned to sing at an early age, and by 13, had my very own Fender Strat guitar. I tried my hardest at learning all that I could. Because I was born with cerebral palsy, I had to teach myself an adaptive playing style. I learned to write and record my own music, despite these difficulties. In college, I started making great use of my writing abilities by reviewing music, as well as copy editing. I guess it's best to stick with what you know, while welcoming a fair challenge at the same time.
Previous Gallery: Foreigner at Wisconsin State Fair 8/11/18, Milwaukee, WI.
Next Gallery: Belly at Revolution Hall in Portland, OR 08.11.2018