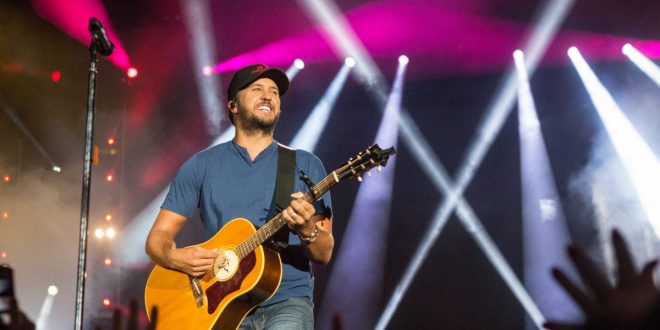 One of the biggest names in country music made a pit stop in Rogers, AR at the Walmart Amp the first day of August. Luke Bryan‘s What Makes You Country Tour has embarked across the U.S. since the beginning of the year, hitting up various cities with openers Morgan Wallen & John Pardi.

The Georgia entertainer presented himself in tight blue jeans and a blue tee, dancing from the get-go. A carefree, living-it-up mood settled in as Bryan handed out beers for “All My Friends Say.” Bryan asked Arkansas to “get ‘r up” for “Light It Up” after a large, soft grey bra was thrown on stage. He stood from the end of the catwalk looking like he’s about to leap out during the heartfelt tune while the keys and guitars swayed throughout the amphitheater.

A sing along burst into the night sky as electric guitar and slamming drums introduced the 2009 hit “Someone Else Calling You Baby.” A sizzling transition into “Kiss Tomorrow Goodbye” fired up the Amp as Bryan hugged the mic while belting out front and center. He made his way back to the front of the catwalk and marked the final strum on a gold guitar.

The crowd interaction was strong throughout the night, and he spoke as if the audience were standing side by side in a crowded room. Arms rose as he asked who all had to work tomorrow. “Shit, I am very sorry… my bad. Just get you some cheese puffs, 4 Advil, a glass of water, and 6 more beers,” he joked. He had such a way of captivating the crowd, grinning from ear to ear.

Fans stomped to the beat of “Most People Are Good,” but not before a couple of embraces took place. Bryan asked the audience to hug their mothers if they were with them tonight, and two strangers in the row directly ahead went in for a bear hug. Words flashed on the big screen behind the band while hollow flutes and tender acoustic guitars played. The track ended with an acoustic sing-a-long as Bryan echoed “I believe ol’ Arkansas is good” and asked the crowd to love one another.

The chit-chat continued as he made a comment on the perfect weather (which he wasn’t lying!) Despite being in the hottest month of the year, somehow the blistering sun kept away and a cool breeze sailed across the Ozarks. Bryan described it was perfect “Sunrise, Sunburn, Sunset” weather before the bass dropped and the crowd knew what to expect next. Smiling and dancing ensued while Bryan jumped up and down into the end of the bridge.

For anyone who attends any type of event in Arkansas knows it’s pretty common for a crowd to ‘call the hogs.’ Taking pride in the hog calling, fans cheered as Bryan announced it’s close to football season. Bryan took pride in his roots from Georgia and let out a “Bye Felicia.” A familiar riff filled the Amp speakers after Bryan asked if the audience if they would want to be pissed off. His playful side shined bright that night as he joked how everyone was about to run to the gates. “If you’re calling the hogs tonight, you’re pretty damn country!” and banjo picked in to the title track of both his latest release and current tour.

A change of pace cleared the air as light piano keys seduced the crowd for “Strip It Down.” The performance highlighted the gentle guitar slides underneath the red, blue, and purple lights. A couple very much in love slow danced up and down the aisle a few times, and it was clear they were beautifully lost in the moment. Bryan stripped down to strictly just the vocals by the end of the track, which sent shivers down spines and made hair stand up on arms.

In honor of his father’s birthday, he took one shot of tequila with the crowd, while also saluting to veterans. At this moment, fan interaction continued more like one-on-one conversations as he called professors out one-by-one. First on the roll call were teachers, to where he asked when local schools went back in session. Next, he shouted out all the nurses in the house, making a single fan’s day as he spent time joking with her about being a newly registered nurse. The Amp roared as he called for all the party crashers, “wow”-ing to himself with a grin mid-way through “Crash My Party” as fans’ singing was almost louder than he was.

The compilation throughout the set covered both older hits like “Do I,” newer tracks such as “Drink A Beer,” and a Billy Currington cover of “Good Directions.” Bryan mentioned and displayed his pride in the cover, as it was his very first number one song as a songwriter. Another partial cover that took place as Maroon 5‘s “Girls Like You,” which seemed like an accidental appearance in the set. He randomly started picking at his guitar, which led to the similar sound of the cover. It was definitely a happy accident as fans swooned over his falsetto range, and he shortly let the crowd take the lead once he claimed he didn’t really know the words. “Does anybody know the Cardi B part?” asked Bryan. His attempt made the audience laugh as he tried the first line but got tongue-tied.

All in all, the show made for an ultimate summer experience. Luke Bryan definitely knows how to entertain his crowd and is the life of the party. He isn’t afraid to dance like a fool, drive the ladies crazy, or end the night drinking a cold one. Tracks like “Play It Again,” “Rain Is a Good Thing,” and ending set song “That’s My Kind of Night” proved to be crowd favorites as Bryan turned all his energy loose. If there’s one thing fans can take away, it’s that Luke Bryan isn’t afraid to stick to his roots and show Rogers, AR what makes us country.