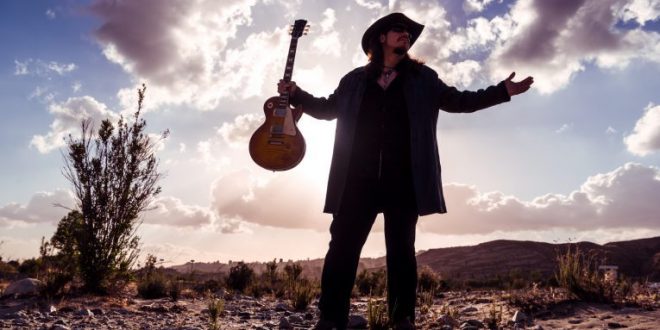 Lance Lopez is a Louisiana-born, Texas-bred guitarist and singer-songwriter hailing from Dallas. In his teens, Lopez’s prodigious musicianship brought him to the big leagues, as he went on to work alongside such legends as Johnny Taylor, Buddy Miles, and Lucky Peterson. Further, he embarked on a worldwide touring run that has kept him busy ever since. His blues and hard rock hybrid sound ultimately personified the Lance Lopez Band, a quartet who would release several acclaimed full-lengths through the millennium and thereafter.

Even amidst those milestones, Lopez and company continue to hone their craft. The band’s long-awaited latest album Tell the Truth, out last March, is certainly the rawest and most engaging thus far. I caught up with Lance to discuss his musical upbringing, the making of the album, as well as what he could asses about his own artistic abilities.

ME: With all these shows you have lined up, how’s the tour been?

Lance: It’s been going great! We’ve been rocking right along, and it’s cool that we’ve been able to really break out in North America.

ME: I saw also that you met up with Jimmie Vaughan, which must have been a blast for you. Was this your first time meeting him, or had you always been close?

Lance: I’ve actually known Jimmie Vaughan for many, many years; he’s from Dallas, too. I’ve also been close with Martha Vaughan, Stevie and Jimmie’s mother, since I’ve lived in their neighborhood when I was younger.

ME: In a similar way, Stevie Ray Vaughan was one of your primary musical influences. And with that, let’s go back a bit. What was your music environment like growing up?

Lance: When I was younger, it had a lot of early rock and roll from the 50s, like Elvis and Chuckberry, and that kind of thing, you know? Then I discovered Jimi Hendrix a couple years later. Once we moved to Texas from Louisiana, I got to see Stevie Ray Vaughan ad BB King together, so that’s where the real influence of the blues came from. I have a lot of different influences, but after that concert, I just dove head on into the blues.

ME: Were there any particular albums that kickstarted your interest in the blues?

Lance: There were many different albums. It was just anything I could take in, and that I could possibly absorb. I started at the beginning with delta blues, then worked my way up to Chicago Blues, and then eventually into the British Blues explosion of the 60s. That’s how I really took a liking to the blues – through those British rock bands of the 60s and 70s.

ME: You began playing professionally at 14, and I can tell it’s been quite the journey for you.

Lance: Oh, absolutely! It’s been an interesting one to say the least. I’ve been to a lot of different places all over the world and have worked with so many great musicians. It was a very educational thing.

ME: Before we get to your latest album, Tell the Truth, what went on just prior to its release?

Lance: Oh, man! There was so much stuff that happened. I started putting together a new record, so I went to LA and hooked up with the producer Fabrizio Grossi. We ended up forming Supersonic Blues Machine, which is still in existence, although I’m no longer a part of it. We did two albums with them, and they both featured some pretty high-profile guitar players. So, that’s essentially what happed in between albums.

ME: With the group you’re in now, the Lance Lopez band, do you find this to be the most workable incarnation?

Lance: Yeah! It’s cool because we have a great collection of musicians. We’ve got my longtime partner in crime Wes Jeans on guitar. He’s a pretty legendary player from east Texas. He and I are like brothers and have worked on and off on different projects. It’s really special when we come together. Then, we brought back Tony Valdez on bass, who did a lot of overseas tours with us on those previous albums. And last, we have our drummer, Landis Chisenhall. He’s kind of the new guy, even though he’s been with us for the last four or five years.

ME: Instantly, what strikes about Tell the Truth is the sound you guys end up creating. It’s got a blues foundation, but with a slew of heavier and soulful nuances.

Lance: That’s kind of what we went for when we sat down to do the record. It’s classified as blues, but we wanted to include all our other influences in there – the hard rock, southern rock, country, and R&B. I’m glad you could hear all those other styles that come out.

ME: I found the album’s lead single, “Down To One Bar” interesting. Of course, it’s a modern reference, but the way it’s delivered is so timeless.

Lance: Cool, man. Thank you! “Down To One Bar” was a great place to start; it was the first song we did for the record. It has everything in there – blues and rock, given a southern feel from the country and Americana influences. It has a great, relatable story, and encompasses everything together into one package.

ME: The video for the single seemed like a really cool experience. Could you talk a little bit about how that came to be?

Lance: It was fun, because we wanted to make a video that represents the glory days of music television, which doesn’t have much presence anymore. You know, a lot of people in blues rock prefer making videos right in the studio. Those videos just show them sitting around recording, and I honestly don’t know how that became a trend in our genre, but it’s been like that nowadays. So, we wanted to do something different and make one like they did back in the 80s and 90s.

ME: Overall, do you feel that you’ve achieved the best possible outcome with this album?

Lance: Well, it’d better be good; hope we haven’t wasted those five years (laughs)! I’m just really happy with it. Am I completely happy? Never; because I always feel like I can do better. But for the most part, I’m satisfied.

Lance: Yeah, man! Continue to help share our social media sites, share our music with your friends, and come out to our shows. We’ve been touring a lot more now than we ever have, so we hope to see everybody.

I come from a family who is passionate about all things music. I learned to sing at an early age, and by 13, had my very own Fender Strat guitar. I tried my hardest at learning all that I could. Because I was born with cerebral palsy, I had to teach myself an adaptive playing style. I learned to write and record my own music, despite these difficulties. In college, I started making great use of my writing abilities by reviewing music, as well as copy editing. I guess it's best to stick with what you know, while welcoming a fair challenge at the same time.
Previous Mantar Release Teaser For Upcoming Single “Seek + Forget”
Next Gallery: Mayday Parade at Vans Warped Tour 2018 – Holmdel, NJ